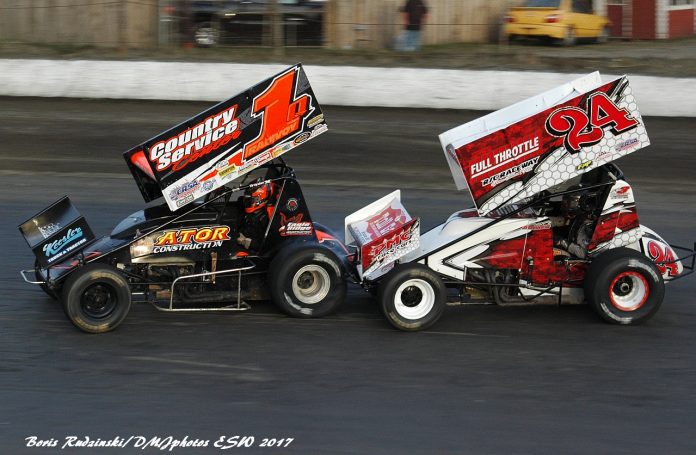 MIDDLETOWN, NY – It was the biggest event and stage of the 2017 Super Gen Products/Champion Power Equipment CRSA Sprint Tour Season. The stars and cars of the 305 Racesaver series group time-trialed their way into an event that would ultimately decide the 2017 Series Champion.

Masonville, New York’s Dana Wagner, in the Hardwood Hills Golf Course 25w, and hometown driver Thomas Radivoy, in the Country Service Center 1Q, would lead the field to the green flag of the 20 lap championship feature event. The race was shortened from 25 laps to 20 laps due to tire wear concerns from the drivers and teams.

Radivoy would jump out and set sail to take the early lead. Thomas had to have a career-type day in order to have a chance at catching Altamont, New York’s Jeff Trombley for the series championship. Trombley, in the Warren’s Auto Body 3A, carried a 17-point lead into the A-Main event.

The race would be slowed on a couple of occasions. The most notable caution flag condition was for a multi-car tangle between 5 cars in turn 4 on lap 7. The only car that was not able to continue after this incident was the Escape RV, Johnson and Conroy Insurance 19em of Sparrowbush, New York’s Emily VanInwegen.

The remainder of the main event would see a battle between Radivoy and the 24 Brandon Wright Motorsports car of East Greenbush, New York’s Bobby Hackel. Hackel had a very balanced and fast sprint car under him. He would make various attempts to close in on Radivoy. But it seemed like turn two would prove to be one of his weak points on the speedway. While Hackel seemed to have a car to win the race, he could not put together a good enough run to overtake Radivoy.


Thomas Radivoy would go on to take his fourth A-Main event win of 2017. Hackel would settle for second. Jeff Trombley would drive a good enough race to maintain his points advantage and come home with a third and final podium position finish. This would be Trombley’s first open-wheeled championship in his illustrious driving career. Trombley would also be crowned the “Hard Clay Challenge” mini series Champion.

The officials and teams of the CRSA Sprint Tour would like to thank all of the tracks, marketing partners and fans involved in supporting the 2017 season. The 2017 championship awards banquet is in the works and the announcement will be made in the very near future. Fans and teams can go to crsasprints.com, ‘CRSA Sprints’ on Facebook, and @CRSAsprints on Twitter to find out more about this year’s championship and the plans for the 2018 season.