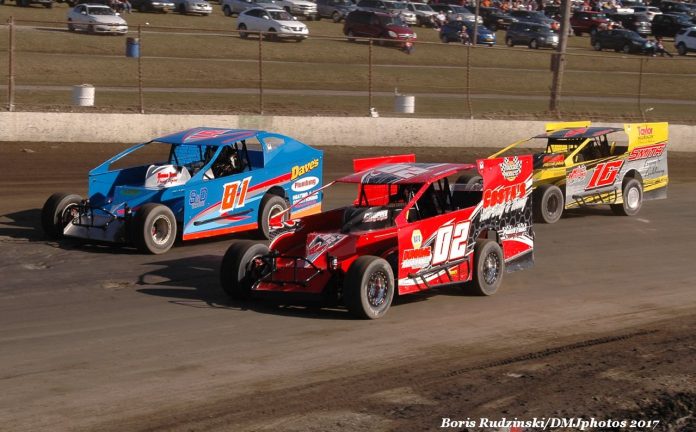 The ‘Hard Clay Open’ on Sunday, April 8 waves the green flag on the STSS Halmar International North Region: a 50-lap tussle around the ‘Legendary House of Power’ offering $5,000-plus to the winner, $1,000 for 10th and $500 just to start the main event.

Drama and excitement have been at the forefront of the ‘Hard Clay Open’ as big- and small-block combinations fight for supremacy on the five-eighths-mile track.

Last April, following a flat tire in heat-race competition, Andy Bachetti soared from 20th starting position to earn the ‘Hard Clay Open’ triumph. Bachetti caught – and passed – both Stewart Friesen and Brett Hearn in the final laps as the crowd rose to its feet.

Stewart Friesen utilized small-block power to score the ’15 triumph after battling Pennsylvania star Rick Laubach for the lead in the early laps.

The inaugural ‘Hard Clay Open’ took place on April 6, 2014. Bachetti recorded his first win in the event over a hard-charging Tim Hindley on a sunny Sunday afternoon.

Joining the STSS Modifieds on the ‘Hard Clay Open’ doubleheader are the Orange County Fair Speedway Crate 602 Sportsman racing for $1,000 to win and $100 to take the green under weekly track rules and procedures.

Complete race rules and information have been posted at the following link: http://bdmotorsportsmedia.com/hard-clay-open-rules-prices-general-info/

Registration is now open for both the STSS Modified and Crate 602 Sportsman divisions.

A practice session is on the docket at OCFS on Saturday, April 7 from 4-8 p.m. Haulers may be left in the pit area overnight.