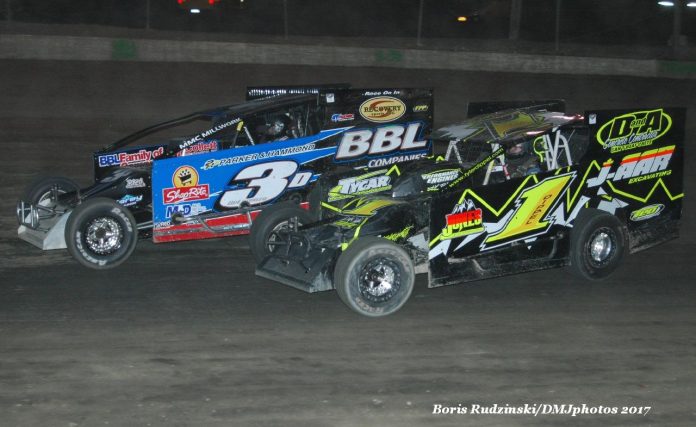 MIDDLETOWN, NY – After a huge kickoff to its southern region in Delaware, the ‘countdown to Middletown’ is underway for the Bob Hilbert Sportswear Short Track Super Series (STSS) Fueled By Sunoco.

The ‘Hard Clay Open’ takes on special significance with the announcement that Halmar International’s Chris Larsen has assembled a group to lease the speedway for five years with an option to purchase. The STSS visit will be the first race at OCFS under the new Halmar leadership.

The ‘Hard Clay Open’ is event No. 1 of 10 toward the $12,500 Halmar International North region championship. The North Region once again starts and finishes on the ‘Hard Clay’ of OCFS.

The only repeat ‘Hard Clay Open’ STSS Modified victor has been Andy Bachetti. The Sheffield, Mass., driver has earned his triumphs in distinctly different fashion. During the inaugural race in 2014, Bachetti led every lap from his pole starting position. A year ago, the ‘Wild Child’ marched forward from 20th starting spot to pass both Stewart Friesen and Brett Hearn in the final laps.

Pit admission is $35, with no license required.

There will be an Open Practice for racers on Saturday (April 7) with gates opening at 2 p.m. and practice from 4-8 p.m.

Complete rules, times, pricing and information can be found at the following link: http://bdmotorsportsmedia.com/hard-clay-open-rules-prices-general-info/