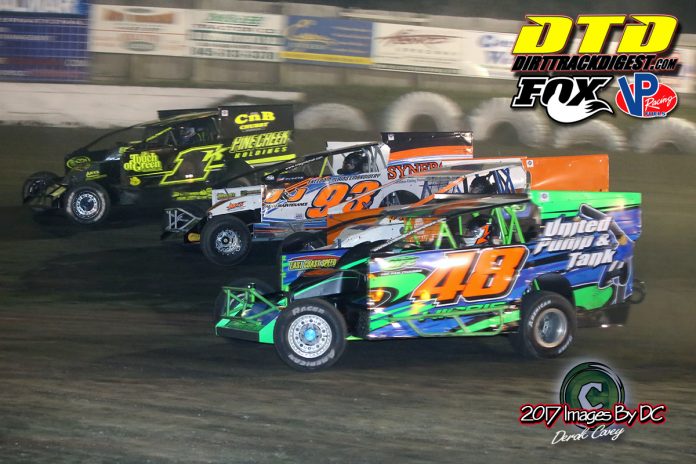 On Sunday, April 8, the fifth annual ‘Hard Clay Open’ kick-starts the 10-race STSS Halmar International North Region at Orange County Fair Speedway. The STSS big-block/small-block Modified contingent descends on the five-eighths-mile Legendary House of Power with more than $30,000 in prize money and additional bonuses on the line for 50 laps of racing.

Most importantly, points begin to tally toward the North Region crown.

Andy Bachetti of Sheffield, Mass., has been a loyal follower of the STSS since its inception and has been rewarded for it. Bachetti has won the North Region championship on three occasions (2014, ’16 & ’17), and he is also a two-time ‘Hard Clay Open’ victor.


The only other North Region champion in series history is Stewart Friesen of Sprakers, N.Y., who won the title in 2015. Friesen won the ‘Hard Clay Open’ in the spring of his championship year.

A number of contenders are looking to unseat Bachetti and Friesen at year-end.

Anthony Perrego, the rising star from Montgomery, N.Y., finished second in the North points a year ago with wins at Accord (N.Y.) Speedway and Thunder Mountain Speedway in Center Lisle, N.Y. Perrego and his Brian Smith team are armed with potent No. 44 equipment to tackle the STSS stars.

The Jeremy Smith Racing team of Jeremy Smith and Billy Decker both finished inside the top-five in STSS Halmar International North Region points last year and contended for the title through year-end.

Canadian Mat Williamson joins the Behrent’s Performance Warehouse team in ’18 to chase the North Region cash. Williamson is a teammate to Tommy Meier, who has finished inside the top-10 all four years of the series’ existence including a best of second-place in ’16.

Danny Creeden has knocked on the door of a series championship in each of the four STSS seasons so far; the Wurtsboro, N.Y., driver has an arsenal of equipment at his disposal with new backer Westar Mechanical on the quarter-panels.

Matt Sheppard and his new Maryland-based Hurlock Auto & Speed team fired out of the box with a strong second-place finish in the STSS Velocita-USA South Region opener at Georgetown (Del.) Speedway on March 17. So far in his illustrious career, Orange County has been “kryptonite” for Super Matt. Can he get his title run off with a breakthrough win?

A new engine program for the United Pump & Tank team has Jerry Higbie ready to boost his STSS performances aboard the No. 48. Higbie had some solid outings a year ago with Steve Lowitt’s team.

Ryan Godown, second on the all-time STSS win list, has shown his ability to win on the large, fast tracks of the South Region and bullrings of the North Region. The ‘Ringoes Rocket’ hopes to be a 50k-plus champion this year.

Duane Howard in the Norm Hansell No. 357 and Jeff Strunk along with Billy Pauch Jr. have made plans for more frequent North Region participation in ’18.

It all gets started at Orange County Fair Speedway with the ‘Hard Clay Open’ fifth edition. And ends at the fairgrounds oval with the Behrent’s Performance Warehouse ‘Hard Clay Finale’ championship event on Thursday, Oct. 18.

Pit admission is $35, with no license required.

Crate 602 Sportsman ($1,000 to win under track rules) join the STSS Modifieds on the program.

There will be an Open Practice for racers on Saturday (April 7) with gates opening at 2 p.m. and practice from 4-8 p.m.

Complete rules, times, pricing and information can be found at the following link: http://bdmotorsportsmedia.com/hard-clay-open-rules-prices-general-info/

Located at 239 Wisner Avenue Middletown, N.Y., 10940 on the Orange County Fairgrounds, Orange County Fair Speedway is the oldest continuously operating dirt track in the United States. The first auto race was held at the speedway in 1919. The five-eighths-mile oval offers fully-covered and half-covered grandstands in addition to open bleacher seating on the frontstretch and turn one areas, with drive-in viewing on the backstretch. To learn more, contact the Orange County Fair Speedway office at845.342.2573 or visit www.orangecountyfairspeedway.net.