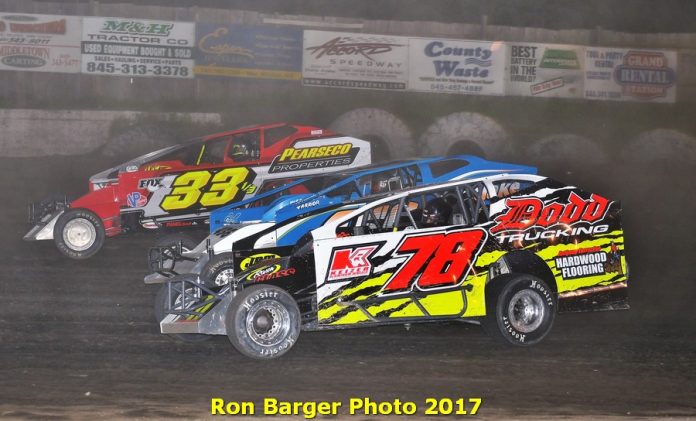 MIDDLETOWN, NY – With Opening Night jitters out of the way, the more than 100 Orange County Fair Speedway race car drivers are primed for the second night of exciting stock car racing Saturday night, April 28 at the historic Middletown, New York track. Sharing top billing will be the Small-Block Modifieds and the United Racing Club (URC) 360 Sprint Cars. The Sportsman and Street Stocks will also be in competition. All divisions will run heat and consolation races to set the starting lineups for their respective feature races.

With Big-Block Modified drivers eligible to compete in both divisions, several of the track’s top drivers will be in action this week even though the Big-Block Modfieds have the night off. This includes Tommy Meier, of Waldwick, New Jersey, who has won championships in both open-wheel divisions.

URC has a long history at Orange County having raced on the five-eighths-mile Hard Clay speedway 71 times since 1950. The 2017 race meet was a combined URC-Patriots Sprints event won by Jordan Thomas (Patriots) over Curt Michael (URC).

The sponsor of the night of action—which gets underway at 6:30 pm—is Wallkill Inn and Suites.

Advance ticket sales and track information is available at the track website, www.orangecountyfairspeedway.net, or from at the Track Office. Call 845-342-2573 during business hours.