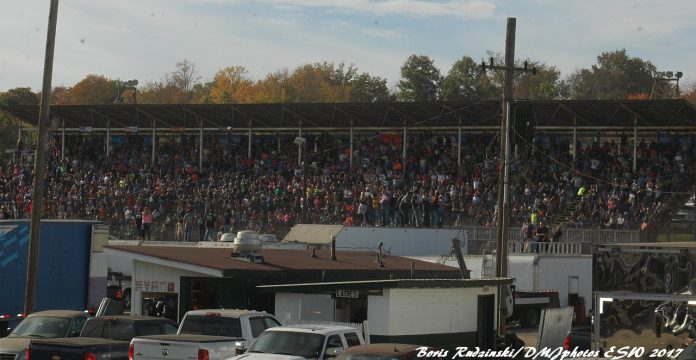 MIDDLETOWN, NY – It’s a new era for one of the country’s most historic dirt tracks.

Orange County Fair Speedway – closing in on its 100th anniversary season in 2019 – is a rejuvenated venue this season, thanks to an influx of capital improvements courtesy of Orange Motorsport and Entertaining (OME) a Nanuet, N.Y.-based Developer and promoter of entertainment venues.

OME, just prior to the start of the 2018 season, signed a five-year lease agreement to operate the venerable fairgrounds located in Middletown, N.Y.

The Orange Motorsport and Entertainment LLC operating group appointed Michael Gurda IV, who had been promoting the speedway, motocross track and fair on the grounds, as general manager.

Change has been immediate.


First-rate equipment – and plenty of it – made its way to the fairgrounds, including a GPS-driven grader, a large track packer, water truck and much more to allow the track crew do its job.

Construction equipment on the fairgrounds has begun to tear down and/or restore buildings.

Noticeably, all seats and boards have been removed from the half-covered grandstands, making room for all-aluminum seats, a massive project expected to be completed in the very near future.

In the meantime, portable bleachers for approximately 700 have been placed in the turn-four area, a throwback to years gone by for longtime attendees of the speedway.

Wider walkways are under construction in the full-covered grandstands, which had already been completely renovated by Halmar International prior to the lease agreement being signed.

“Once the weather broke, things have been moving very quickly,” offered Gurda, who has been extremely busy overseeing the multiple projects underway on the fairgrounds.

“There have been so many things I’ve wanted to do but haven’t had the capital to tackle on my own. I did everything I could to keep the place open and a race track with the resources I had available.”

“With the backing and enthusiasm OME has brought here, we’re full-speed-ahead working every day on improvements fairgrounds-wide.”

Despite a long, brutal winter, OCFS got cars on the track with an open practice session on April 14.

One week later, the speedway opened on April 21 with a program headlined by a $5,000-to-win big-block Modified event plus a full program. After a slightly delayed start to work in extra moisture applied to the speedway, a virtually dust-free, racy surface prevailed.

“This track needs laps on it,” Gurda said. “It’s part of spring here. After we had some dust at practice our track crew did some extra prep for the opener. It paid off in the end.”

Gurda was very pleased to report that despite cold temperatures a crowd of more than 2,000 took in the opener with the drive-in section nearly full.

“It was cold,” he bottom-lined. “But the enthusiasm was there. Our fan base is strong at Orange County.”

For the first time in recent memory, Orange County will host a midweek Modified event on Tuesday, May 8. The ‘Hard Clay Open’ was postponed from its original April 8 date by one month, meaning the Bob Hilbert Sportswear Short Track Super Series Fueled By Sunoco big-block/small-block Modifieds and OCFS Crate 602 Sportsman will fire off under the lights on a Tuesday night.

“For the most part our schedule won’t change too much,” Gurda said. “OME has been looking at some midweek racing here. With the weather for the ‘Hard Clay Open’ being so cold in April, it gave us a chance to be the first big midweek show in our area.”

With OME’s support, big things are ahead for Orange County Fair Speedway.

“There is a lot to look forward to at Orange County,” Gurda said. “OME has big plans for the future and our 100th anniversary season. The place definitely has a new life.”