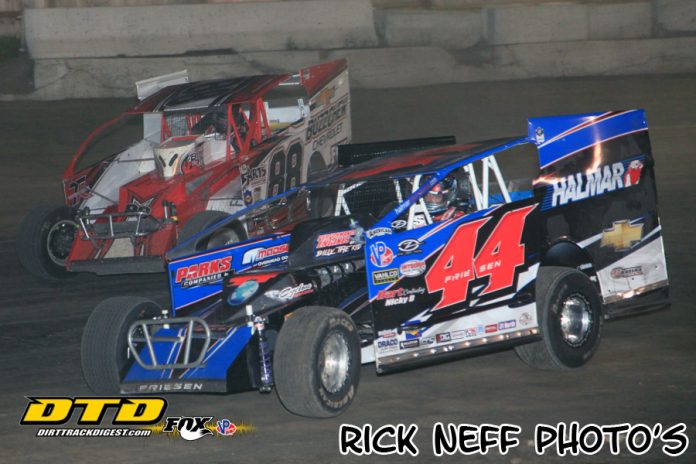 The Sprakers, N.Y., driver earned a $5,200 payday in the opener for the STSS Halmar International North Region at the five-eighths-mile oval in dominant fashion after starting seventh in the 30-car feature field.

“These guys gave me an awesome car tonight,” offered Friesen, 34, after exiting his Halmar-backed No. 44. “When you’re out front you never know who’s coming, especially here. It’s a long race.”

A field of 48 talented STSS big-block/small-block Modified drivers signed in for the first midweek show under a new era of racing at OCFS under the Orange Motorsport and Entertaining LLC banner.


The 50-lap fifth annual ‘Hard Clay Open’ saw Mike Mahaney’s Buzz Chew No. 88 lead the field to the green flag. Ryan Godown, however, put the Lincoln Auto Body No. 5 into the top spot on the opening tour.

Friesen cracked the top-five on lap five. A lap later, he advanced to third behind Godown and Mahaney.

On lap eight, Friesen slipped past Mahaney to the runner-up spot.

Two circuits later, he took over a lead he wouldn’t relinquish.

Behind Friesen, battles raged throughout the top-10.

Godown’s stellar drive derailed with 15 laps remaining when he slowed on the frontstretch with a flat left-rear tire.

Rick Laubach then inherited second in the Ryan Kerr-owned No. 1K.

Despite three cautions inside the final dozen laps, Friesen’s only challenges came on restarts as he was able to pull away during green-flag runs.

“These Short Track Super Series races attract the best drivers from all over,” Friesen said. “It always feels good when you can get a win in one of these shows.”

“We’re trying to run the whole series – North and South – this year,” Laubach said. “I really wanted to get off to a good clean start here to have a good points position going into the next few races and we did that.”

“That was fun racing out there,” Higbie said. “Every restart I was counting off cars hoping I’d be on the outside. I’d gain a few, get caught in the wrong line and lose a few. This series is the best around.”

After starting 23rd as a consolation winner, OCFS all-time leading winner Brett Hearn of Sussex, N.J., drove to fourth at the finish, surging forward in the race’s second half.

Billy Decker of Unadilla, N.Y., however, was the race’s Hard Charger in Jeremy Smith’s No. 91. Decker started 25th and drove to fifth, an advance of 20 positions. He received $500 courtesy of Grand Rental Station Middletown, $200 from Land Hoe Maintenance and product from QA1 and Beyea Headers.

Finishing sixth through 10th, respectively, were Mahaney, of King Ferry, N.Y.; Tommy Meier of Waldwick, N.J., driving the Jeff Behrent-owned No. 3; Matt Sheppard of Waterloo, N.Y., who pitted for a tire and to repair a right-side sail panel issue on lap nine with the Hurlock Auto & Speed ride; Duane Howard of Oley, Pa., in the first-ever appearance by Norm Hansell’s No. 357 on the Hard Clay; and veteran Jeff Heotzler of Wallkill, N.Y., who recovered from a flat tire on lap 18.

A late arrival to the speedway, Brad Horton pocketed $1,000 in the accompanying OCFS Sportsman 20-lap main. Horton started last in the final heat race after missing the initial draw for position. He worked through for a redraw position and started the main from fourth on the grid.

Horton worked forward and grabbed a lead he wouldn’t relinquish at the midway point of the main.

“We did our homework on this car,” offered Horton. “It definitely paid off tonight.”

Racing resumes for the STSS on Memorial Day Weekend with a doubleheader. On Thursday, May 24 Delaware International Speedway in Delmar, Del., hosts Round No. 3 of the STSS Velocita-USA South Region plus Crate 602 Sportsman (Race No. 3) and Delaware Super Trucks.

On Sunday, May 27 the STSS Halmar North Region returns to action at Thunder Mountain Speedway in Center Lisle, N.Y., plus the opener for the STSS Crate 602 Sportsman North Series and Street Stocks.

HARD CLAY HAPPENINGS: Race fans were treated to all-new aluminum seating in the half-covered grandstands as crews worked lateMonday night and into Tuesday to complete the latest renovation project at the fairgrounds track….

The draw for heat-race starting positions was held prior to the drivers’ meeting at the Short Track Super Series trailer….

A late-arriving, but healthy midweek crowd took in the event….

The win for Friesen was his second in the ‘Hard Clay Open’ event, having previously won in 2015 while driving for Jeff Daley. He earned $5,000 from the purse and $200 as the Halfway Leader from Superior Remodeling….

A new engine program has boosted the Jerry Higbie United Pump & Tank efforts as he chases the 2018 STSS North Region aboard the No. 48….

Pennsylvania driver Mike Gular made his first-ever OCFS visit a satisfying one as he recovered from a flat tire to finish 11th in Terry Fasnacht’s No. 2A….

Andy Bachetti pitted with shock issues. He was able to get back on the lead lap via the ‘Lap Down, Go Around’ presented by Algonkin Motel and ended up placing 15th….