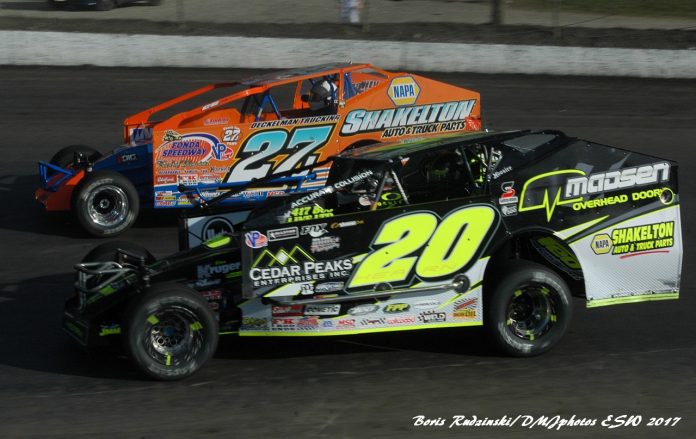 CONCORD, NC  – The Super DIRTcar Series Big-Block Modifieds will return to the hallowed 99-year-old Orange County Fair Speedway on Thursday, July 19 for the Battle on the Midway. The victor takes home $10,000 and a guaranteed starting position at the 47th annual NAPA Auto Parts Super DIRT Week. The Series has not raced on the Middletown, NY, 5/8-mile speedway since 2014. For many years prior to that, race fans and drivers alike cured their post-NAPA Super DIRT Week blues with a trip the Eastern States 200 in mid-October. The first Super DIRTcar Series OCFS race was held in 1972 when Buzzie Reutimann took the checkered flag.

2018 marks the 178th Orange County Fair. In 1919, the fair held its first automobile race on the new Orange County Fair Speedway. The track has the distinction of the oldest continuously operating dirt track in the country, nearing its 100th anniversary. This year the Battle on the Midway will run concurrently with the fair. Pre-ordered fair tickets will include free entry into the 100-lap, $10,000-to-win, Super DIRT Week Qualifier. Also new to the fair this year is a partnership with Dreamland Amusements, who will bring new attractions to the midway. Big crowds and plenty of prestige are guaranteed. The Thursday evening race will attract the best Big-Block Modified drivers in the country, all of them looking to make history in Victory Lane.

There is one driver whose name has become synonymous with Orange County Fair Speedway: Brett The Jet Hearn. Hearn leads the all-time Super DIRTcar Series OCFS win list with 15 wins and the track record, set in 2013 with a 20.313-second lap. In 2006 Hearn won an unmatched seven races in a row on the high-speed, 5/8-mile circuit. Also notable, living legend Jumpin’ Jack Johnson’s final career Super DIRTcar Series win came at the Orange County Fair Speedway in 2001. The Series will honor Jack Johnson at Fonda Speedway for ‘The Jack’, a 100-lap tribute race, which will also award the winner a guaranteed starting position for the 47th annual NAPA Super DIRT Week at Oswego Speedway.

Halmar Racing driver and NASCAR Camping World Truck Series ace Stewart Friesen will be on hand to go after the $10,000 grand prize. Friesen led the Heroes Remembered 100 at Weedsport Speedway on Memorial Day flag to flag. Friesen had to hold off young gun Max McLaughlin to secure the win. Both Friesen and McLaughlin will participate in the NASCAR Camping World Truck Series Dirty Derby at Eldora Speedway the day before the Battle on the Midway, but they’ll be flying back to make the race. Also, Halmar Racing veteran driver and Track Champion Jimmy Horton will join the Series for the Battle on the Midway, hoping to secure his starting position at Super DIRT Week.