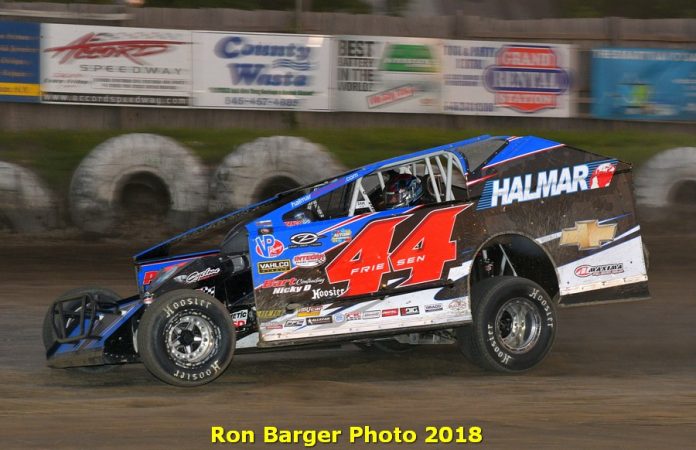 MIDDLETOWN, NY – Standout modified driver Stewart Friesen returned to the Orange County Fair Speedway to check on all the changes that his car owner Chris Larsen has been making to the facility and came home with the trophy on Saturday night in the big block modified division.  He was followed across the line by Brian Krummel, Chris Whitehead, Jerry Higbie and John Ferrier.

Nostalgia Night 2018 was a landmark night at OCFS for many reasons. To start, June 2nd’s event marks the first race on the 5/8 mile dirt oval’s newly resurfaced clay, one of 2 significant upgrades to the facility. The other major upgrade to debut at Nostalgia Night is the nearly completed, new Half-Covered Grandstands. Though the original structure remains, the half-covered stands received an upgrade that includes all new seating surfaces made from aluminum and standing decks across the top and bottom of the stands. Additionally, handicapped accessibility was improved. Overall, the grandstands, as well as the new track surface were a hit with race fans. Going into next week’s full card event, sponsored by County Waste, more improvements and adjustments will be made to the track surface.

As much of a draw as the improved track and stands, was legendary OCFS fan favorite, Buzzie Reutimann. Buzzie “The Legend” and son David came out in his UMP Modified and clicked off some impressive hot laps, receiving the checkered flag (and a black flag) from David. It was the highlight of Nostalgia Night’s program and a special treat to all the race fans to see Buzzie take his last laps in the northeast. In addition to Buzzie, over 50 other classic OCFS drivers were in attendance to sign autographs, reminisce and get excited about the future of OCFS.

Nostalgia Night also hosted Gary Balough, one of OCFS’s most infamous drivers. Gary came out with his restored “112 Batmobile” and copies of his soon to be released autobiography “Hot Shoe! A Checkered Past: My Story.” In it Gary details his career in racing and his time as a smuggler which ultimately led to his incarceration.

In the big block division, OCFS regulars were joined this week by Stewart Friesen, Brian Krummel and Danny Creeden, who all came out to give the new track surface a try. It would come down to Krummel and Friesen, both of whom very quickly worked their way to the front of the pack. In the end, the no.17z car of Brian Krummel couldn’t catch Friesen, fresh off his Hard Clay Open and Weedsport’s “Heroes Remembered 100” wins. With the increased presence of non-regulars at the track, OCFS regular drivers may have to step their game up.

2 time 2018 feature winner, Anthony Perrego, appeared to be playing it safe, experimenting with the new track surface and finishing 13th. Perrego maintains the number 1 spot in championship points, with Tommy Meier and John Ferrier trailing behind.