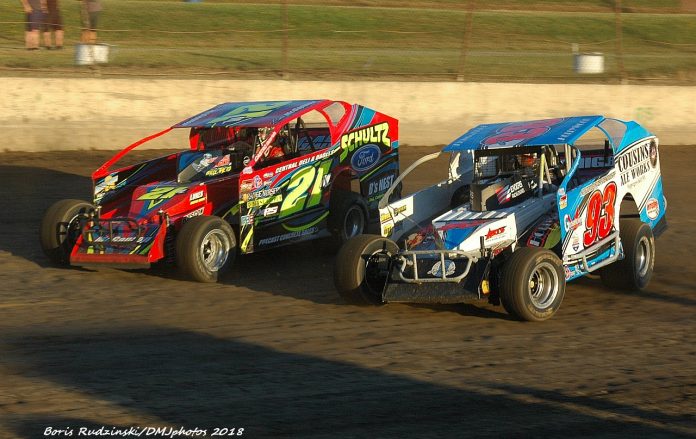 The evening’s sponsor at the historic Hard Clay speedway is Pine Bush Equipment.

With just six more nights of racing left in the season-long point chase to determine track champions, all the top drivers will be out to score as many points as possible. In the headline Big-Block Modified division, three-time winner Anthony Perrego holds a slim 16-point lead edge (628 to 612 points) over former track champion Tommy Meier, who has scored a single victory. Former champion Jerry Higbie, latest feature winner Chris Whitehead, and defending Orange County titlist Jimmy Horton trail, although within striking distance of the point leader.

With four victories, Jimmy Johnson should have a commanding lead in the Sportsman division. But consistency has kept Greg Sleight just ten points back (737 to 727 points) despite not yet claiming a winning trophy. This duo is considerably ahead of Daniel Morgiewicz, Corey Cormier, and Joe Conklin, but in this most unpredictable division anything can happen…and usually does.

And in Orange County’s only full-bodied racing division, the Street Stocks, three-time winner Jim Maher tops Wayne Taylor by 37 points (785 to 748). But Charlie Donald and Jim Hajkowski are both still in conterntion.


Former champion driver and later Orange County general manager Will Cagle, of Tampa, Florida, is expected to return to the track this week as well. During his illustrious racing career, Cagle won 47 Modified feature races at Orange County, including three Eastern States 200s (1966, ’70 and ’71) and five consecutive (1966-’70) track point championships.

Advance ticket sales and track information for all remaining Orange County Fair Speedway race dates, including the September 15 Eve of Destruction and the October 19-21 57th Annual Eastern States Weekend, can be found at the Orange County website, www.orangecountyfairspeedway.net, or from the Track Office. Call 845-342-2573 during business hours. 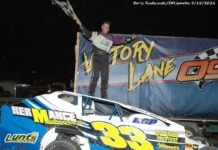