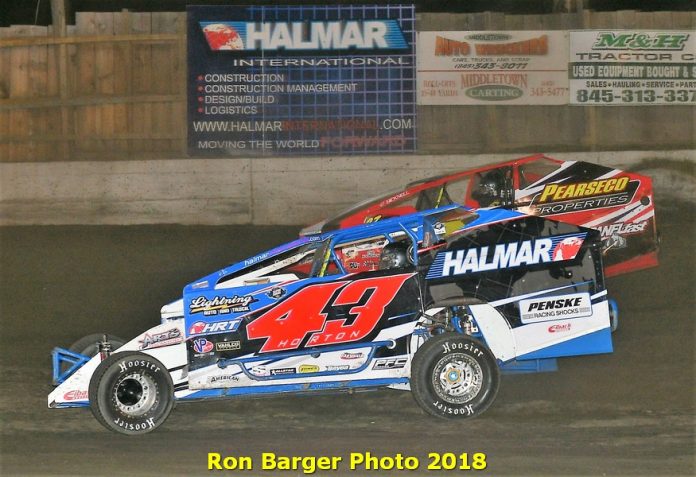 MIDDLETOWN, NY – The ground-pounding Big-Block Modifieds headline the Saturday, August 11 at Orange County Fair Speedway in Middletown, New York. Also in action will be the unpredictable Sportsman division and the exciting Street Stocks. The Rookie Sportsman, a division for novice drivers trying to break into the unique Northeastern form of dirt track Modified racing, are also on the schedule for the final time in 2018.

With just three races remaining in this year’s season-long point chase for the Big-Block Modified and Sportsman drivers, you can expect the action will be exceptionally intense. Both divisions will compete in qualifying heat and consolation races to set the starting lineup for their respective feature races. The Big-Block Modified feature is set for 30 laps around the five-eighths-mile Hard Clay speedway; the Sportsman feature will be 20 laps. Following qualifying races, the Rookie Sportsman and Street Stock feature races will be shorter distances.

ICELESS LLC is the evening’s sponsor. It’s also Law Enforcement Night. All members of law enforcement with proper identification will be admitted free of charge.

Admission prices for the August 11 race meet remain at $15 adults, $13 seniors, and $1.00 for children 10 and under. There is a $1.00 car charge for the Drive-In section. Parking on the fairgrounds is free. The full night of racing begins promptly at 6:30 pm.

Advance ticket sales and track information for all remaining Orange County Fair Speedway race dates, including the September 15 Eve of Destruction and the October 19-21 57th Annual Eastern States Weekend, can be found at the Orange County website, www.orangecountyfairspeedway.net, or from the Track Office. Call 845-342-2573 during business hours.