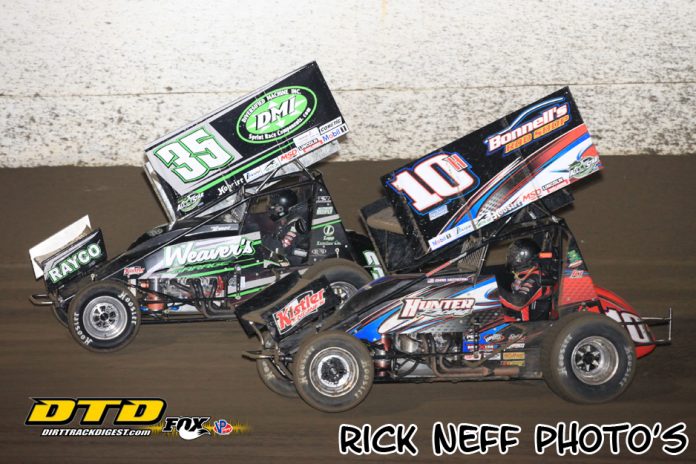 Both types of race cars will compete in qualifying events that will set the fields for their respective feature races.

The Arctic Cat All-Star Circuit of Champions Sprint Car Series is one of the oldest traveling sprint car organizations and is a staple of grassroots, open-wheel racing. Motorsports entrepreneur and former three-time NASCAR Cup champion Tony Stewart became the sole owner of the original winged sprint car tour in January of 2015.

Currently, drivers Aaron Reutzel and Carson Macedo are locked in a tight battle for the ASCOC point championship, with defending titlist Chad Kemenah not far behind. Rounding out the top-five in the series point chase are Jac Haudenschuild and Dave Blaney. Dale Blaney, Dave’s brother, is the series all-time race winner, with 134 feature victories.

The Orange County Small-Block Modified drivers are also in close competition for their point championship. Brian Krummel leads with 561 points, but four-time winner Anthony Perrego has made up ground and is just 16 points back. Shane Jablonka, Tyler Boniface, and Craig Mitchell complete the top-five in points.

There is an increase in admission prices for the August 18 special race meet. Contact the track office at 845-342-2573 during business hours, or order tickets on line at www.orangecountyfairspeedway.net. Parking on the fairgrounds is free. The full night of racing begins promptly at 6:30 pm.

Advance ticket sales and track information for all remaining Orange County Fair Speedway race dates, including the September 15 Eve of Destruction and the October 19-21 57th Annual Eastern States Weekend, are also available from the track office or website.