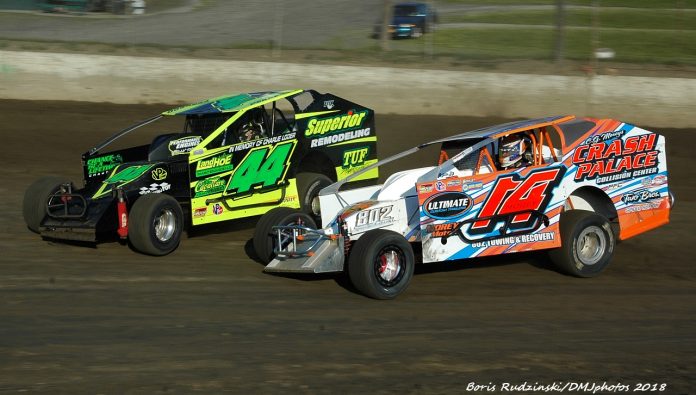 MIDDLETOWN, NY – When the exhaust fumes settle from the Saturday, August 25 race meet at Orange County Fair Speedway in Middletown, New York, there will be just a single week of competition before the track point champions are crowned. For drivers in each of the speedway’s stock car divisions this makes the upcoming racing program even more important as point championships—including trophies, cash bonuses, and all-important bragging rights—get closer to being determined.

Four racing divisions—Big-Block Modifieds, Sportsman, Rookie Sportsman, and Street Stocks—will be in action on the 25th, with a full program of qualifying and feature races. In addition, the 305 Sprint Cars of the CRSA have a return engagement on the five-eighths-mile Hard Clay speedway.

In the headline Big-Block Modified division, young Anthony Perrego holds a 37-point edge over former champion Tommy Meier (754 to 717). But the real battle is for third place. That’s because just 11 points separate three contenders: former champion Jerry Higbie (685 points), defending titlist Jimmy Horton (677), and challenger Craig Mitchell (674). There is a potential 58-point swing between first and last finishers in the night’s feature race…so the standings are subject to significant changes.

All the track championships will be decided on Saturday, September 8, but this Saturday’s Rock Fantasy/Accord Speedway Night will set the stage for the season point finale.


Adding to the drama of the night, the winner of the 30-lap Big-Block Modified feature race will earn an automatic starting position in the upcoming Accord Speedway King of the Catskills race.

Admission prices for the August 25 race meet remain at $15 adults, $13 seniors, and $1.00 for children 10 and under. There is a $1.00 car charge for the Drive-In section. The exceptionally full night of racing begins promptly at 6:30 pm.

Advance ticket sales for all remaining 2018 races, including the September 15 Eve of Destruction and the October 19-21 57th Annual Eastern States Weekend, and track information are available at the Orange County website, www.orangecountyfairspeedway.net, or from the Track Office. Call 845-342-2573 during business hours.