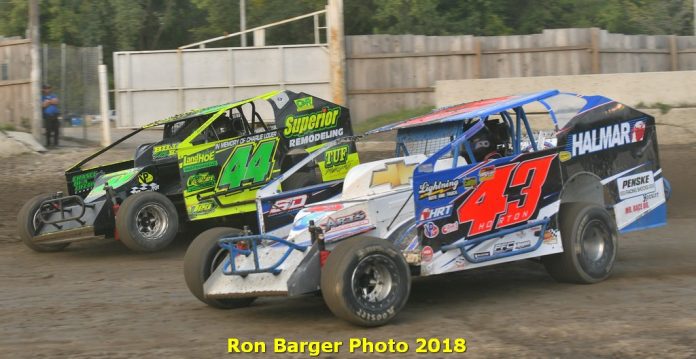 MIDDLETOWN, NY – The final night of the point season for all competing racing divisions is on tap this coming Saturday, September 8 at Orange County Fair Speedway in Middletown, New York. None of the four racing division titles have been decided, and in the exceptionally close Sportsman division, only three points separate the top-two drivers.

In Sportsman competition, Greg Sleight, with one win and consistent finishes, holds a three-point edge (922 to 919 points) over four-time winner Jimmy Johnson. Joe Conklin is third in the standings, 76 points back.

In the headline Big-Block Modified division, four-time winner young Anthony Perrego has a 41-point cushion (859 to 818) over former titlist single victor Tommy Meier. Jerry Higbie, Jimmy Horton, and Craig Mitchell trail, but separated by only four points, will battle for the “show” position in the final rundown.

Brian Krummel tops Orange County’s Small-Block Modified division with 561 points. In pursuit is Anthony Perrego (530), 31 points behind. Krummel has yet to win this season, but his consistent top finishes has put him in the lead. Perrego has four victories to his credit, but a disqualification earlier in the season following an apparent victory, has kept him from leading both Modified divisions.

Admission prices for the September 8 race meet remains at $15 adults, $13 seniors, and $1.00 for children 10 and under. There is a $1.00 car charge for the Drive-In section. The full nights of racing begin promptly at 6:30 pm. In honor of their dedicated service, all First Responders with proper identification will be admitted free.

Advance ticket sales for the September 15 Eve of Destruction, the October 18 Short Track Super Series Hard Clay Final, and the October 19-21 57th Annual Eastern States Weekend, and track information are available at the Orange County website, www.orangecountyfairspeedway.net, or from the Track Office. Call 845-342-2573 during business hours.