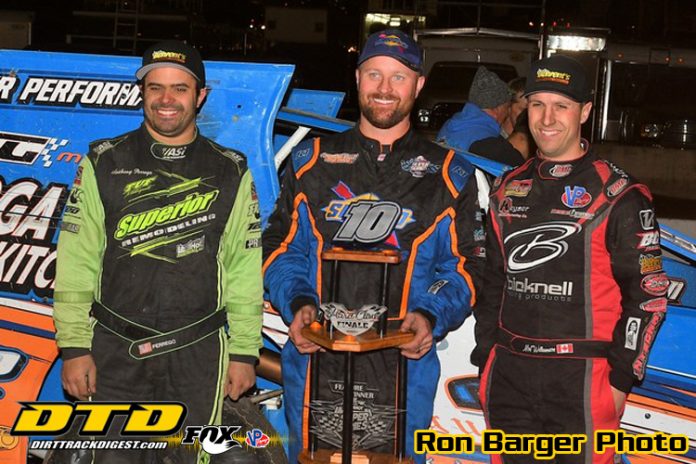 For Mike Gular it has been a great season so far in 2018. Multiple top five finishes capped off with a points title at his home track at the Grandview Speedway. However, there was one thing missing for the Boyertown, Pa., driver in 2018. As close as he has come throughout the year, Gular had failed to win a race and that has bothered the veteran driver all season long. Well, Gular can put that feeling aside as he finally grabbed that elusive victory and it came at the least likely of tracks.

“We knew we had a good car for here after racing here earlier in the year,” cited a happy Gular. “We made some changes on the car in warm-ups, but we ended up changing it back for the heat race and it was just took off. I thought for sure my first win of the year would come at Grandview and definitely not here. It feels so good to finally get that monkey off our back, we work so hard on these cars and it’s been a struggle building these cars all year and running the schedule that we’ve been running. It’s a shame Terry (car owner Terry Fasnacht) is not here tonight. Terry is actually in Texas on vacation with his wife and I talked to him earlier, he told me today is his five-year anniversary of receiving a new lung and that five years ago he never thought he would be in this position to own race cars again so to go for it tonight. I can’t wait to call him on the way home.”

Gular has only seen the Orange County Fair Speedway once before in his life and that came at this year’s “Hard Clay Open” back in April. Racing on the legendary speedway back in April, Gular had a decent run and came home with a strong eleventh place finish after pitting out of the top ten with a flat tire. If you asked Gular where that first win might come this season, the Middletown, N.Y., track would be at th,e bottom of the list. But hey, stranger things have happened.

“This place is awesome,” mentioned Gular. “I told Jeff, my former crew chief who had to drive the truck today because I don’t have a CDL, on the way up that this place is freaking awesome. It’s an old-style fairgrounds type of track and it’s so cool. Hey, I just won at freaking Orange County Speedway. I can’t believe it. I have never won a big race before and to do it here is just unbelievable.”

Gular not only won this year’s “Hard Clay Finale” but he did it in convincing fashion after taking the lead from OCFS regular Jerry Higbie on lap nine. It wasn’t easy for Gular as he had to fight off Mat Williamson through a couple of restarts but once he was able to get back to single file ahead of Williamson, Gular was able to stretch his lead out to a safe advantage.

The only thing Gular had to worry about after that was taking care of his tires as the Hard Clay at OCFS is known to be extremely tough on the American Racer Tires.

“I knew I had to take care of my tires and I was worried for sure especially towards the end there,” said a still excited Gular. “I could see the right front tire and that looked good, so I was trying to take care of the right rear and take it a little easy. If I would’ve saw Mat there towards the end I was ready to push it a little more if I had to. Mat has a lot more experience running these types of races with the Hoosier tires and he’s really good, so it was really cool to beat him tonight.”

I asked Gular why he choose the inside line on the restart instead of the outside where most guys tend to choose to get a nice arc going into turn one.

“Hey, I run Grandview man. I’ll give you the rub rail if I have to. I ain’t kidding you either, It’s for ten grand. Your damn right I’m going to do what I need to do to stay in front.”

Williamson in the Mix with a Second

The last STSS North series race that Williamson attended at the Orange County Fair Speedway didn’t go to well for the Jeff Behrent owned team as they ended up having to scratch for the night after warm-ups with engine problems. The team has redeemed itself throughout the series as Williamson ended up a contender for the title coming into the “Hard Clay Finale” in the third spot with a chance to win title.

Unfortunately, Williamson’s title hope came up a little short, but the driver out of St. Catharines, Ont., drove his heart out and came out of the night with a hard-earned runner-up finish. Williamson ran hard and gave it everything he had to get by eventual winner Gular, but just wasn’t quite good enough on this night.

“We’ve been good the few races with Jeff’s car (car owner Jeff Behrent),” mentioned Williamson. “We reflect back on the beginning of the year and we probably could’ve done a little more to win the title but hats off to Billy (North Series champion Billy Decker). You don’t know earlier in the year that you will be in position come this time to win it. These titles are hard to come by and Billy did what he had to do to win it and that is great for them. These titles aren’t an easy thing to get so congrats to them guys. We have a good car for here and now we’ll look ahead to tomorrow, so we can get in a good position to win the really big one on Sunday.”

Anthony Perrego did everything he could to win the STSS North championship, but just came up a little short. Perrego lost the championship to Decker by a mere two points which translates to one position on the race track for either driver.

Perrego ended up with a third-place finish in tonight’s “Hard Clay Finale” but it wasn’t quite good enough to wrestle the title away from the veteran Decker.

“Yeah, we came up a little short tonight,” cited a disappointed Perrego. “It sucks, we had a really good car tonight and I thought I had a good chance to sneak in and win the championship, especially with Billy struggling early on. I had a chance at Williamson there on the one restart but couldn’t quite get him and after that it was all I had. Congratulations to Billy (Decker) and now we look forward to Sunday, we have a good big block car for this weekend and hopefully we can be standing a few spots over on Sunday.”