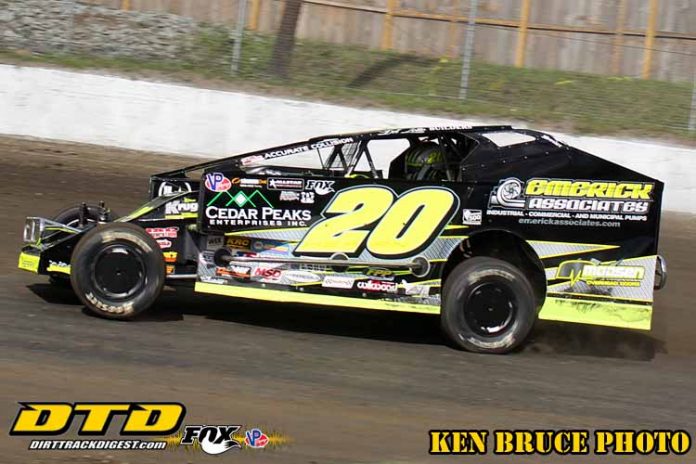 MIDDLETOWN, NY – For the second day in a row the driver that crossed the line first in the main-event wasn’t the driver that actually got the victory.  Stewart Friesen dominated Saturday’s Eastern States 100 leading the entire distance while driving C.G. Morey’s No. 14 after losing the motor in his primary mount.  Unfortunately, the Sprakers, N.Y., driver came up 11 pounds light on the scales which gave the win to Brett Hearn.  Hearn was less than five pounds to the good after crossing the scales himself.

“I felt bad for Stew (Friesen),” commented Hearn in victory lane.  “It’s amazing.  He hopped into somebody else’s car and came through it.  It ran that good, but in the end it takes a little bit of homework to make sure you got enough weight in the car.  It wasn’t off by much.  It’s just one of those things.  I’ve been on the short end of that stick and today I’m on the long end.”

At the start it as Matt Sheppard and Anthony Perrego bringing the field to the green with Hearn going off from the seventh starting position.  As the race exited turns one and two for the first time it was Friesen getting by both Sheppard and Perrego to take the lead off of turn two.

The race ran caution free over the first 30 circuits with Friesen leading the way.  He caught traffic on lap 19 which caused his lead to shrink.  Perrego was able to get to his back-side in traffic, but wasn’t able to make a pass for the lead.  They were the top two when the caution flag came on lap 31 for Gary Edwards Jr., and Rick Laubach.

A huge melee ensued on the next restart as several drivers got together coming to the green flag off the fourth corner.  On the next several restarts incidents occurred with the most serious coming on lap 35.  This crash included Ronnie Johnson, Tim Hindley, Patrick Reiser, Kenny Tremont and Brett Haas.  The red flag was necessary with several drivers needing to be cradled to the pits.

Hearn was able to make the most of the restarts.  He picked up a car at a time winding up in the second spot as the race reached lap 37.  He was now in line to possible challenge Friesen for the victory as they out raced the rest of the field.

After a few more yellows for flat tires and spinning cars, it was still Friesen and Hearn the class of the field at the halfway point with Perrego in line in third.  That’s the way the line-up remained as the race reached traffic a second time.  Hearn closed in to his backend, but before a move could be made the yellow reared its head again as Michael Storms car slowed in turn four.

The top three remained the same at the next green flag.  It wasn’t until lap 79 that things changed as Perrego pulled off while third when the throttle linkage broke on his No. 44.  Friesen continued to set a torrid pace with Hearn staying right there.

On lap 85 Hearn got a great run off of turn two which allowed him to pull to the inside of Friesen going into the third turn.  The pair slid up the race track with neither driving back down.  Friesen was able to keep him in second.

“I think, just like last year when he caught me sleeping a little bits, he was lollygagging and I got that big run on the back straightaway,” cited Hearn.  “I thought that ‘this might be the move.’ I didn’t quite get there.  We regrouped.”

Another caution came on lap 92 as Joe Bonetti exploded a right rear tire.  The next restart saw L.J. Lombardo drive around Hearn going into the first corner to take second.  One lap later the pace slowed again when Haas stopped in turn four.  Hearn took advantage of the green to get back to the runner-up position which proved to be the pass of the night.

“If it wasn’t for that last restart it could have easily been his race,” Hearn said of Lombardo.

Hearn ran second to Friesen in the closing laps, but the scales tipped the race in his favor giving him the $15,000 win.  It puts him in line for a possible $10,000 bonus if he can also grab the checkered flag in the Eastern States 200 on Sunday afternoon.

“We’ve been close the last couple of years,” stated the now 17 time winner of the event small-block event.  “It’s amazing what we’ve got here this weekend.  I’m very excited to start the race and see what happens.  Hopefully my luck continues.”

Lombardo was a surprise second place finisher after time-trialing inside the top six.  The Danbury, Conn., driver was piloting the Frankie Harper No. 25 that he won with earlier this season at the Lebanon Valley Speedway.  At one point he got up to second only to have the final restart not play in his favor.

“If that caution didn’t come out right there in the end I think that was our race to win,” mentioned Lombardo.  “I knew if I showed the nose to Hearn on a restart that he wouldn’t chop me.  We drag raced down the front straightaway.  I knew if I drove it in straight he’d have to tuck in behind me and that’s exactly what he did.”

Sheppard, of Waterloo, N.Y., brought his Bicknell home in the third spot after the disqualification.  He struggled on restarts, but was happy to finally finish a race after his poor luck the last few weeks.

“I just couldn’t get the restarts I really needed to get back up in the hunt,” said Sheppard.  “At the end of the day, the way things have been going, to come of here in third with a nice payday and the things in one place…I’ll take it.”

Brian Krummel finished in spot four while Tommy Meier came from the B-Main to finish in the fifth spot. 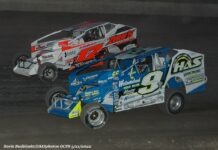 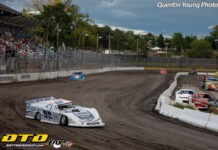