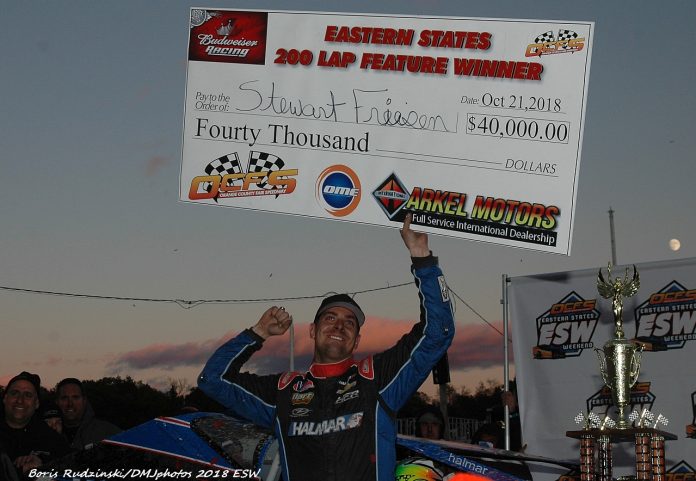 MIDDLETOWN, NY –  After coming so close to winning the small block portion of Eastern States on Saturday but was denied due to being light at the scale,  the Sunday affair was a different story. Friesen was never seriously challenged for the lead once taking control on lap 144. A drama less day filled with endless caution flags was the story of the day outside of Friesen’s easy win.

“What a race team, these guys are awesome,” said Friesen after his second career Eastern States 200 win.  “They work so hard.  I obviously have to thank the boss (Chris Larsen) and everything he’s done for my myself, my race team and this race track.  I’m super proud to get this win.”

More than 46 cars started the 57th running of the Eastern States 200. Brett Hearn, who was the victor on Saturday and was in search of the Halmar bonus for sweeping the weekend, would lead the field to green along with Jeff Heotzler.

It only took seven laps for the field to become single-file and it was just three laps later that Hearn got his first taste of lap traffic on lap 10.

Hearn was pressured early in the 200 by Ryan Godown. The first of many cautions on the day flew on lap 14 for Tyler Jashembowski. Cautions flew again on laps 21 and 24.

Hearn pitted with 32 laps were in the books but wouldn’t be in the lead the rest of the event.  Friesen also took the opportunity to come down pit road at the same time as many of the leaders.  He took fuel and at that point the team wasn’t sure if they had gotten enough fuel in the car.

“There was a couple worries,” mentioned Friesen.  “Eric (Mack) came on the radio and he wasn’t sure how much gas we got in it on that stop.  He wanted to come back.  As slick as the track was I didn’t think that was a good idea.  We stayed out, gambled and it paid off.”

Godown continued to lead the early portion of the race when the race went back to green on lap 46. Ronnie Johnson pressured Godown for the lead on the restart but Godown was able to maintain control.

The caution flew again on lap 52. While under yellow Anthony Perrego and Rick Laubach pitted. Neither of these drivers were a factor today either.

The field went back to work again on lap 59 only to be slowed again by yellow on lap 63.  The yellow was for Jashembowski again.

Godown pitted on lap 66 to give up the race lead. He changed a right rear tire and took fuel. He was never able to see the front of the field again. He was later involved in a wreck and his day was done on lap 154 after making contact with Matt Janiak in turn four.

More yellows were out for Jimmy Horton on lap 72, Tommy Meier on lap 81. The again on lap 91, 104 for Chuck McKee who was making his return to big-block Modified racing after taking some time off away from the sport. Caution also fell on 114 for Billy Decker who came to a stop on the front stretch.

With all of these cautions and pit stops, the leader was now Matt Sheppard, but the cautions still kept coming.

Sheppard pitted on lap 130 and went a lap down. This handed the lead to Danny Johnson. Johnson’s reign as the leader was short lived. The caution waved again on lap 140 for Chris Schultz. Once again the green flag waved and Johnson was on the point, but Friesen was about to take complete command of the race on lap 144 as he and Danny Johnson sped into turn one.  Friesen got a wheel under Johnson going into the corner allowing him to take the lead.

“I had to battle back by there by ‘The Doctor’ (Johnson),” stated Friesen.  “It was crazy.  That one last restart after we ran a bunch of cautions the carb loaded up because it was so cold. The tires were cold and he got back by me.”

Still more cautions were on display. This time the caution waved for Matt Janiak and Ryan Godown who contacted each other in turn four on lap 154.

While Friesen and Johnson were duking it out for the lead, the racing just behind them was about to heat up. Fuller took control of third on lap 161 and Hearn took over sixth on lap 164.

Another yellow on lap 169 slowed the field. With the ensuing restart a massive pile up at the exit of turn four and into the front stretch nearly clogged up the whole track.  Involved were Craig Mitchell, Billy VanInwegen, and seven other cars.

With the lap counter frozen at 180, the field went back to work. Friesen still was setting the pace. The top three cars were gaping each other and had some distance between themselves and the rest of the pack.

Just seven laps later, yet another caution flag came out. This time for Michael Maresca who came to a stop on the front stretch on lap 187.

The last 13-laps were run under green and Friesen picked up the massive $40,000 payday. The day was marred at the start of the B-Main when CG Morey was involved in an accident on the front stretch. Morey’s Bicknell modified hit the front stretch opening in the pit road wall head on and not on destroyed his car, he demolished it to the point where he needed to be extricated from the car using a back board as the paramedics cut the halo portion of the cage. Morey was able to take the steering wheel off and slammed his hands down inside the car after the violent wreck. He was transported to nearby Orange  Regional Medical center. Morey complained of intense pain in his lower back. He was alert and able to speak to first responders while being taken out of the car on a backboard.

Morey indicated via Facebook that he has a broken back that will not require surgery at this time.  He’s bet kept overnight for observation…

Hearn suffered a flat right rear on lap 39 and tried to get back to the front but would never get there.  He struggled the rest of the event with fuel pressure issues falling back to a disappointing 16th place effort…

Brian Krummel’s day came to an end on lap 30 with a broken driveshaft on the Zubi’s Racing No. 17z…

Peter Britten ended up finishing in the 40th position.  The Australian driver looked to avoid a slowing Hearn when he was collected along with Richie Eurich.  His day ended a few laps later with a severely damaged race car…