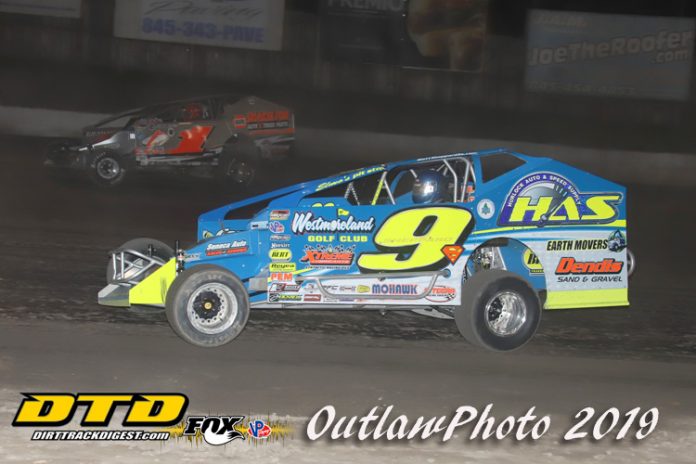 MIDDLETOWN, NY – Matt Sheppard has definitely figured out the new surface at the Orange County Fair Speedway. The Waterloo, N.Y., driver pocketed another $10,000 on Friday night in the 80-lap feature event in winning by over four seconds.

Sheppard had never won a main-event coming in 2019 at the Orange County Fair Speedway. Counting Friday night’s win, he now has three wins in three attempts this season.

“Obviously, you couldn’t ask for a better start to the weekend,” stated Sheppard. “Tomorrow is the granddaddy. That is the one we want. We are looking forward to it. With any luck at all, we’ll be standing here again tomorrow.”

Orange County regular Anthony Perrego raced around Mike Mahaney on the opening circuit to take the lead off of the second corner. He led the first two laps before giving way to Billy Dunn.  Dunn rocketed by him with his rear bumper on the wall in turns one and two.


Dunn was strong early setting a quick pace as Stewart Friesen stayed close.  With nine laps showing on the scoreboard, Dunn got his taste of traffic while Friesen threatened his lead. Friesen worked and worked before finally going by Dunn on lap 13 for the lead.  Dunn got him back a few laps later.

Lap 16 saw a caution for Mike Gular as he got helped around in turn four. At this point it was Dunn out in front with Sheppard moving up from seventh to fourth.

Friesen and Dunn mixed it up again for the lead at this point.  Friesen made another pass of Dunn on lap 18 to take over at the front. Friesen worked the bottom; Dunn went high with Sheppard watching the race unfold in front of him from third.

This trio remained at the front with Friesen and Dunn exchanging the lead multiple times. Friesen had it for a handful of laps with Dunn regaining it a few laps leader. As they diced it out, Sheppard waited for an opening as his car began coming on.

“It was kind of the same deal as last night,” mentioned Sheppard. “We really didn’t fire off that good at the drop of the green. The longer the race went, the better the car got.”

Lap 33 is when Sheppard was able to maneuver by Friesen first, then Dunn for the race lead. Sheppard was better than both on the inner part of the five-eighths mile.

Now in command, Sheppard stretched his lead. Dunn was the only driver to remain in striking distance as he and Sheppard checked out.

With the laps clicking higher and higher, Sheppard’s only real challenge became slower traffic. As he did on Thursday night, Sheppard was methodical and only took chances when necessary. He had some close calls, but was good enough to get by the slower cars.

“I was having a tough time clearing them,” said Sheppard of traffic. “I did hear him say we had some lapped cars separating us. That definitely took some of the heat off. It got a little tough to pass them there at the end. I almost had a big scare there in three and four. A couple of them got together and I was in the middle of it. Luckily we were able to keep the tires up and keep it going.”

He had no issues in dominating the second half of the race for another $10,000 paycheck. Dunn, of Watertown, N.Y., settled for second while Friesen was over a straightaway behind Dunn in third.

Perrego had the best finish so far for a track regular finishing in fourth with small-block Modified feature winner Larry Wight completing the top five.