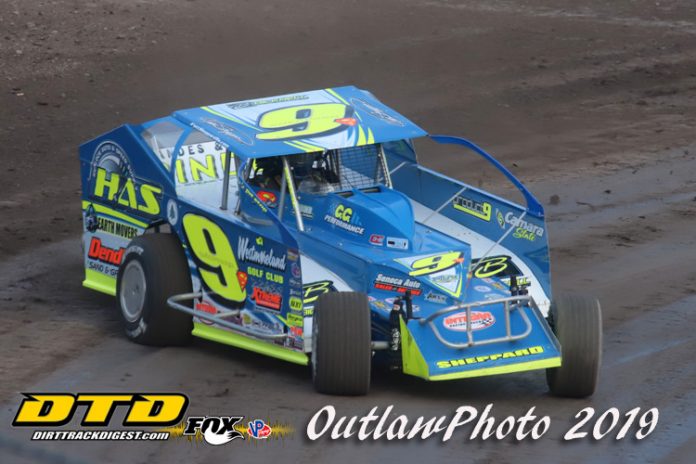 Getting a perfect score in any sport is always a challenge.  Being perfect in racing is even more difficult. There are just far too many variables. A perfect start to a chance for $100,000 at the Orange County Fair Speedway during Centennial Weekend is scoring 200 points via two feature wins.  The Orange County definition of perfection is currently Matt Sheppard.

Sheppard dominated the Battle of the Midway 100 on Thursday night for the Super DIRTcar Series in claiming the win to earn 100 points toward a Centennial Weekend guaranteed spot.  He then backed that up with a four second win in the 80-lap feature on Thursday night.  All told, Sheppard has earned $20,000 in two days of racing at the Orange County Fair Speedway while earning a perfect 200 points.

Sheppard is locked in, at worst, to the 14th starting position Saturday night.  Joining him in the overall tally for locked in drivers in second is Erick Rudolph.  Rudolph, after a third and a ninth, earned 192 points to put him 15th in the main.

Billy Dunn, who finished second on Friday, scored 170 points to lock-in to 16th.  Mat Williamson’s two top-ten finishes put him fourth in points for the 17th starting spot.  He was tied with Johnson, but his sixth place finish was better than Johnson’s best to put him one spot better.  Johnson is guaranteed 18th.

All 12 drivers have the option of running on Saturday for a shot to improve their starting positions in the 40 driver field that will go for $100,000.

Below is a breakdown of the point standings based on an unofficial point tabulation for the two nights of racing action.


**ALL POINTS ARE UNOFFICIAL**