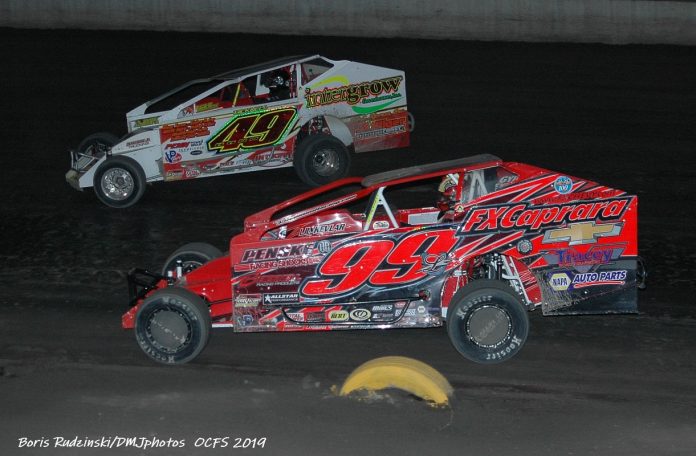 MIDDLETOWN, NY – Whether you win by an inch or a mile, it’s a still a win.

That was the case on Friday night for Larry Wight. The Phoenix, N.Y., driver held off Billy Dunn on the final lap to win the small-block Modified 25-lap main-event at the Orange County Fair Speedway as part of Centennial Weekend.

The win was Wight’s first ever win at Orange County while earning him a whopping $4,000.

“It’s been a long time since we’ve been at Orange County,” cited Wight. “To come back and finish like this, especially after last night, we are happy with that.”


Wight started from the pole position with Billy Dunn on the outside. The duo battled hard for the lead at the start as they exchanged the top spot multiple-times over the first few laps. Wight ran the bottom while Dunn ran the extreme top by the outside wall.

They remained one and two as they got to slower traffic for the first time on lap nine. Dunn was on the bumper, with Wight up to the challenge. Wight moved around the surface improved surface while keeping Dunn at bay.

“I think the racing is definitely better,” stated Wight about the racetrack. “There is still some work to be done to get a couple of lanes of racing, but it definitely beats the rubber-down track we used to have to run and tear the tires off. It’s a move in the right direction.”

Wight and Dunn were the class of the field and they continued to duke it out for the lead as the laps clicked off. Dunn as never more than a few inches off of Wight’s rear bumper.

On lap 23 as Brian Krummel slowed with issues. This setup a two lap dash to the finish of the main-event between Wight and Dunn.

Wight went to the bottom of the speedway at the green flag while Dunn went to the wall. Dunn pulled even at the line as they came to white flag. He stayed in the high groove, gave it a go while bouncing it off the wall, but come up just feet short of getting Wight at the checkered flag.

Wight scored the victory with Dunn coming home second. Brett Hearn had his best run of the weekend finishing in third followed by Mat Williamson and Pat Ward.