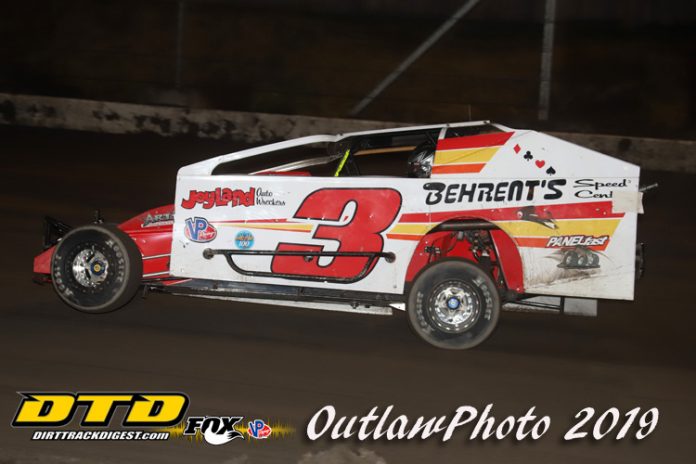 MIDDLETOWN, NY – Mat Williamson has come so close on so many different occasions to winning a Modified feature event for car owner Jeff Behrent. The team has been together almost two seasons with several solid outings, but no wins.

Well, Williamson picked the right time to break through. The St. Catharines, Ont., driver finally did it Saturday night in the biggest race in the history of Modified racing. Williamson got it done at the Orange County Fair Speedway in the finale of Centennial Weekend to earn the $100,000 paycheck that came with winning the 160-lap feature.

“The fans got one hell of a show tonight,” said an elated Williamson after the win. “I can’t thank everyone enough. This is amazing. It’s an amazing job for this team. They knew what to do from the start. It’s been an amazing year-and-a-half with Jeff and Harry (Behrent) racing together at all these tracks. We’ve had seconds and thirds, but we haven’t been able to get away with it. To get this one here is pretty cool.”

Williamson went to the lead at the drop of the green flag with pole-starter Billy Decker falling in line behind him in the early go.


Williamson was the leader on lap six when rain started falling over the grounds. That rain intensified, and on lap 12, a huge melee ensued as numerous cars piled into the wall and one another as the skies opened up over the facility.

Williamson, Decker and a handful of others at the front were unaffected by the rain, but no less than 10 cars crashed in the corner including the winner the prior two nights Matt Sheppard.

After a rain delay that lasted nearly two hours, the action resumed with Williamson picking back up where he left off at the front of the field with Decker behind him on lap 25.

Decker started getting frisky with Williamson on lap 30. He challenged him several times on the bottom of the speedway before taking the lead away in turn four with a power move off the corner on lap 34.

Decker set a good pace which got him caught up to the back of the field on lap 52. Behind him Williamson felt pressure from Danny Johnson. Johnson moved by Williamson on lap 55 and then took the lead on lap 57. The next circuit it was Williamson coming from third to get back out front.

Brian Krummel’s contact with the outside wall on lap 76 necessitated a yellow. The field remained under yellow at the halfway point with Williamson leading Decker, Johnson, Stewart Friesen and Brett Hearn.

The restart allowed Friesen go from fourth up to the second spot. He was ready to take his shot at Williamson for the point. He took several, but couldn’t get the job done to secure the lead.

Williamson got another foray into slower traffic on lap 117. As he worked around the slick surface, Anthony Perrego was making moves of his own. Perrego recovered from the early crash, restarting outside the top 30, to take his spot on the podium on lap 121.

He eventually got second, then Williamson and Perrego came to the line side-by-side for the lead on lap 129. Perrego went high going into turn one with Williamson trying to work the middle. Perrego got the advantage and the lead a lap later.

That was the top two as the laps inched closer and closer to the finish. As they wrestled one another for the lead, they also maneuvered through slower cars trying to improve their positions as well.

Perrego continued to dance the car on the cushion as Williamson searched for something better. He found something a little bit better as he moved to middle and got back around Perrego for the lead on lap 147 as the raced off the fourth corner.

Williamson looked to be in good shape, but Friesen had other ideas. Friesen went by Perrego before putting his crosshairs back on Williamson. He tried time and again to go by Williamson, each time Williamson was up to the task. He kept Friesen behind him.

Then, on lap 157, Friesen got into outside wall and nearly wrecked himself. The yellow was flown for Friesen setting up a three lap shootout to the finish. Friesen kept his spot in line as he never spun or stopped on the track.

The green flag waved and Williamson was perfect. He hit turns one and two on the money allowing him to drive away from Friesen. He led the final two laps for the win.

“Stewart Friesen is one of the best wheelmen ever in a race car,” stated Williamson. “To hold him off him at the end is amazing.”

Friesen brought his battered and bruised race car home in the runner-up position while Sheppard came from the rear after rebuilding his car from the lap 12 crash to cross the line third.

Johnson fell back to finish in the fourth while Decker held on to come home in fifth.