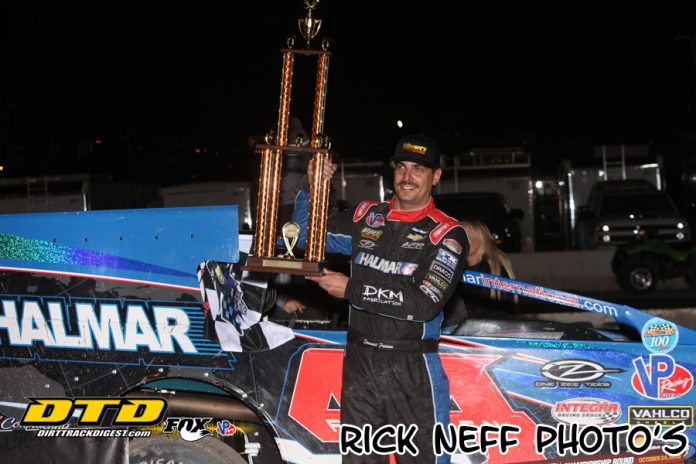 MIDDLETOWN, NY – For the second time in his career, Stewart Friesen claimed the Hard Clay Finale at the Orange County Fair Speedway for the Short Track Super Series. Friesen dominated race while on his way to becoming $10,000 richer in winning his 17th career series main-event.

“That was the most fun you can have in a Modified,” said Friesen after the win. “I had a great race car. Thanks to Chris (Larsen) and thanks to Halmar. Thanks to all the guys that work so hard on these race cars. I’m just so proud of these guys.”

Andy Bachetti started next to Danny Creeden on the front row of the 50-lap feature with Bachetti getting the best of Creeden to lead the opening lap. He opened up a sizeable gap on the field in the early go.

His lead vaporized on lap nine when Mike Trautschold slowed off of the second corner to bring out the first caution. For the restart, Bachetti was flanked by Brian Gleason. Like the initial green, he again bolted away.

Daniel Morgiewicz slowed on lap 14 with problems bunching up the field again for a restart with Bachetti still on point while 12th starting Friesen has made his way up to third.

Bachetti remained the leader when the action picked back up with Michael Storms and Friesen challenging each other for the runner-up spot. The top three remained glued together when a slower car came into play.

The three raced off the fourth turn on lap 17 together. Bachetti and Storms made contact as they looked to avoid a slower car opening the door for Friesen to sneak by them both on the bottom to go from third to first.

Now in control, Friesen took his No. 44 Bicknell right to the wall. He was mere inches off the outside concrete as he pulled away from the field.

“When that lapped car bottled up Andy we were able to sneak by,” stated Friesen. “Then I just held the top. It was good and it was consistent.”

His lead continued to extend until another caution was needed on lap 24 for a slowing Dillon Steuer.

Friesen picked up where he left off on the restart before the race came under the yellow again on lap 29 when Allison Ricci slowed on the front straightaway with problems.

When the race went back to green, Friesen set the pace with Larry Wight taking over second from his 26th starting position. He now looked to challenge Friesen for the lead. That was short lived.

As the laps clicked off it was evident no one had anything for Friesen. His lead continued to expand with Wight remaining second and Anthony Perrego maneuvering his way to third after he started on the inside of the 13th row.

“We could get a jump on restarts on the bottom,” stated Friesen. “There was good bite off the bottom of four and then we could roll the cushion. It was a lot fun.”

Friesen caught traffic late, but with his line being so high on the speedway it wasn’t an issue. He was flawless as he pulled away for the win.

Wight crossed the line second, but came up light on the scales giving the second position to Perrego. Bachetti finished the night in third with Matt Sheppard and Billy Decker completing the top five.

Sheppard’s fourth was enough to earn him his first ever Short Track Super Series North Title.