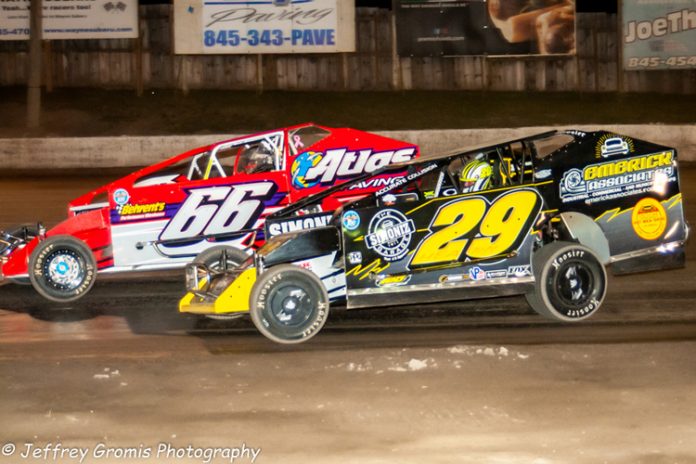 On Saturday evening drivers took the Orange County Fair Speedway looking for an opportunity to pocket $15,000 in the annual small-block Modified 100 at part of Eastern States Weekend.

Only one driver can get the biggest check and that driver for the first time in his career was Mat Williamson.   Williamson bested 75 other drivers in racing to the victory.

Williamson dominated the night’s activities setting fast time in time trials, winning the $1,000 small-block Modified dash to earn the pole position before claiming the win in the finale of the evening.  It was his second high-paying win of the season at Orange County after claiming the Centennial 160 back in the month of August.

Starting from the seventh spot in the 358 race, Hearn was one of the few drivers that was able to race forward to garner a podium finish. Driving the Emerick & Associates No. 29 car, Hearn looked smooth and was able to take advantage of being on the outside for the last restart to get by McCreadie to finish third.

“On the restarts for a lap or two you could get up there and get some momentum and then you had to get back to the bottom,” explained Hearn in victory lane. “Timmy and I swapped those spots back and forth for a little bit and luckily the rain stopped long enough for me to get that last outside run.

“It was good to start where we did.  We qualified good and we were able to move forward in the feature and that was a big deal. It was a good day and hopefully we can carry it over to tomorrow.”

It has been a long time between Modified starts for McCreadie who spends most of his year driving on the Lucas Oil Late Model series. However, the Modifieds are where McCreadie got his start in racing and the Watertown, N.Y., driver tries to get back into the seat of a Modified whenever he has the opportunity.

The always powerful Petruska and Sons No. 66 car hasn’t had a steady driver all season and they were looking to enter a car into this years Eastern States Weekend.  They have had much success over the years at Eastern States, so when the chance to get McCreadie into their Modified came about the team worked out a deal for him to drive in both the small-block and big-block races.

McCreadie was fast right out of the gate in both divisions and locked himself into the small block show after qualifying third in time trials, which locked in the top six cars. In the 100-lap main-event, McCreadie was a solid top three car all race long. At one point McCreadie moved past Sheppard for second only to get caught up behind a lapped car laps later allowing Sheppard to move back past him for the runner-up spot.

On a track that was one lane late in the race, McCreadie could never muster up another challenge to Sheppard and eventually lost the third spot to Hearn coming across the line to finish in fourth.

“It was a lot of fun tonight to be back in a Modified,” stated McCreadie. “I wish we could’ve finished a little better, but-all-in all it was a good night. Brett (Hearn) and I were swapping spots on the restarts and unfortunately for me, I needed one more restart to move back by him to finish third.”

McCreadie felt like his car faded down the stretch and that was key to him falling back in the final tally.

“Our car was really good early on, but the last 20 laps we weren’t as good for some reason,” cited McCreadie.  “I thought I was a little better than Sheppard early on in the race, but I don’t think we had anything for Mat (Williamson). I was able to arc the car early on and got by Sheppard for second, but then I tried rolling the outside there on a lapped car and he was able to pass me back on the inside. All-in-all, it was a good night for us and hopefully we can keep it going in tomorrow’s 200.”

Rudolph Drives from 31st to Seventh

Erick Rudolph didn’t set himself up well with a poor qualifying effort, but the Ransomville, N.Y., driver made the most of his experience with the small-block.  Rudolph was one of only a handful of drivers that was able to make significant gains in the feature on Saturday night.  Rudolph drove his family owned Bicknell from the inside of the 16th row to a respectable seventh place finish in the final rundown.

“I had to run the consi,” said Rudolph.  “We struggled to find speed all day.  In the consi we found a little bit.  We passed a lot of car early.  It kind of got single-file on the bottom.  If it doesn’t rubber-up as early it would have been a better race for the fans, but it’s how some of these races work sometimes.

“I tried to pass as many cars as I could early.  I got up to 15th or so before it rubbered up and then it got tough to pass.”

Stewart Friesen hustled back after a top 10 finish in the NASCAR Truck Series race to start the 100 by virtue of a guaranteed starting spot.  Friesen was locked in via a past winner’s provisional.   Friesen hopped into a Carey Terrance mount that was qualified earlier in the night by Max McLaughlin.  He was a non-factor in the race and went a lap down before pulling in and finishing 37th…

McLaughlin was forced to go ride searching once Friesen returned to run Terrance’s No. 66x.  He ended up landing a ride in Matt Stangle’s No. 6 after he failed to qualify.  He had to go to rear due to the car change.  Like Friesen, McLaughlin was unable to make any headway so he elected to pull in.  He ended up 34th in the rundown…

Louden Reimert made his debut at the Orange County Fair Speedway where he scored a respectable 15th place finish.  The Pennsylvania driver was running even further forward in the feature, but attempts at going to the high-side of the speedway cost him several spots late in the go…

Lance Willix had a strong time trial run locking himself into the top six.  It looked like he was going to walk out of Middletown with a top 10 finish only to spin late in the race.  He would finish 20th.