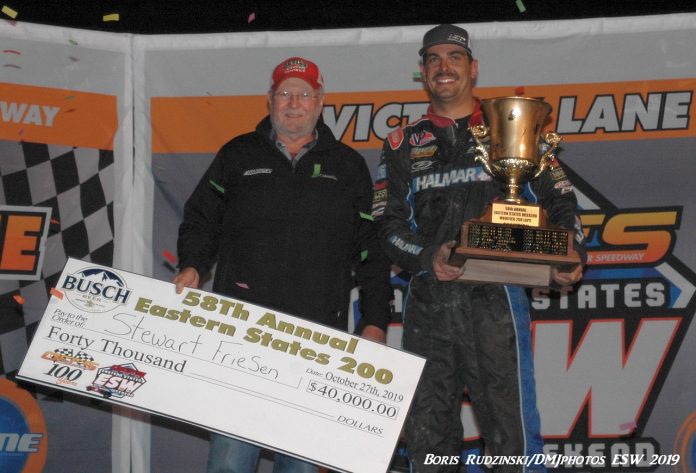 MIDDLETOWN, NY – There is a saying in scripture that the last shall be first.

That was the case on Sunday night in the conclusion of the 58th running of the Eastern States 200. Stewart Friesen started 44th on the grid after using a past winner’s provisional to make the field. He then drove his way to the victory for a $40,000 check in winning his second consecutive Eastern States Finale.

Friesen did nearly all of his passing on the extreme outside of the speedway. He worked forward and secured the lead for good on lap 129 from Billy Decker. From there, Friesen checked out and was unimpeded en route to the win.

“I’m happy,” stated Friesen. “Thanks to everyone that stuck it out today. It was a wild day. A little bit rain does wonders to this race track. It was awesome. I don’t know what to say. It was a long weekend. Thanks to all these great race fans. This is so much fun racing this track.”

Matt Sheppard finished in the second position with Decker hanging on to finish in third. Danny Johnson crossed the finish line in fourth with Larry Wight rounding out the top five.

The feature event went green at 8:30pm after a several hour rain delay with pole-starter Max McLaughlin leading the opening laps of the 200-lap feature. McLaughlin quickly caught traffic and had his hands full by lap six.

On lap 17 caution was displayed as Tommy Meier lost a left front tire and got up against the wall in turn three. This cleared the speedway for McLaughlin with Mike Mahaney on his rear bumper.

Action resumed with McLaughlin picking up his torrid pace as Mahaney and Anthony Perrego chased from behind. The top three stayed unchanged with Friesen charging on the top of the speedway from 44th.

The next caution came out on lap 36 for a slowing JR Heffner. By this point, McLaughlin held the lead with Friesen already into the top 10.

During this caution period several drivers at the front elected to head down pit road for their stops, including the leader McLaughlin. Mahaney now held the top position for the restart.

Mahaney controlled the pace immediately after the green flag with Friesen on the move after he elected not to pit. Friesen took second on lap 46 before focusing his attention on Mahaney.

Mahaney caught traffic allowing Friesen to close up on him. Friesen took the lead in traffic on lap 59 before Mahaney raced by back on lap 60. Friesen went back by on the top off of turn two on lap 61 to take command.

Friesen’s pace stayed strong as he continued on the top. As he worked in traffic he began catching cars that had already been down pit-road who were trying to stay on the lead lap which included early leader McLaughlin.

McLaughlin and Friesen battled hard as McLaughlin didn’t want to go down a lap. During the battle McLaughlin got high in turn one and the car skated into the large safety tires. His car slammed into them hard enough to cause him to get upside down bringing out the red on lap 80. He was okay.

Pit-stops came when the yellow was displayed with Friesen heading in to make his stop along with Mahaney and several other drivers at the front. This handed the lead over to Peter Britten.

“We had a great race car,” mentioned Friesen.  “I was trying to take care the tires so they didn’t seal up.  It wasn’t in our strategy to pit early because we learned what our fuel mileage was at the Centennial race.  We had notes from that.”

Britten brought the race back to green on lap 89. The action at the front picked up quickly with Britten being pursued by Decker, Mat Williamson and Sheppard.

The intense battle saw a four-wide race for the lead off of the second corner on lap 102. Decker got the best of everyone and secured the top spot with Sheppard moving to second and Britten falling to third.

Decker continued to show the way with Sheppard on his tail while Friesen was busy working his way pack up through the field. On lap 116 he put himself back on the podium before going after Sheppard. Before he could make the pass, yellow came out on lap 119 as LJ Lombardo slowed with a broken front-end on lap 122.

After a round of stops, Decker took the green flag on lap 125. Friesen quickly moved by Sheppard for second a lap later before hounding Decker. He finally made his move on lap 129 around the outside of turns three and four. He set sail from this point.

Friesen continued to lead over Decker through multiple restarts. Each time he was good on the top as he quickly gapped the field. Decker tried to stay with him to no avail.

Friesen and Decker remained the top two as Sheppard was coming back up after his final stop. Sheppard got to third on lap 167 before he went by Decker with 25 laps to go.

Sheppard had some ground to make up as Friesen’s lead was a full straightaway by this point. Friesen was working traffic as was Sheppard.

Ground was made up by Sheppard, but it wasn’t enough. Friesen easily scored his third career Eastern States 200 win.

Sheppard had no option but to be happy with second after finishing second on Saturday night as well. He was pleased with how the night played out as he had the best overall Eastern States Weekend of his career.

“Just like last night we were the best of the rest,” commented Sheppard. “We had really good weekend with two seconds. I can’t thank this whole team enough, they work hard.”

Decker admitted afterwards that he lost air pressure in the left front after contact going four-wide for the lead. He hung tough to finish in the third spot.

“We had a really good hot rod,” mentioned Decker. “We got slicing and dicing a little bit there three and four-wide. After that the steering wheel started moving a little bit because the left front went down. We finished with a left rear going down. We are just lucky to finish tonight.”