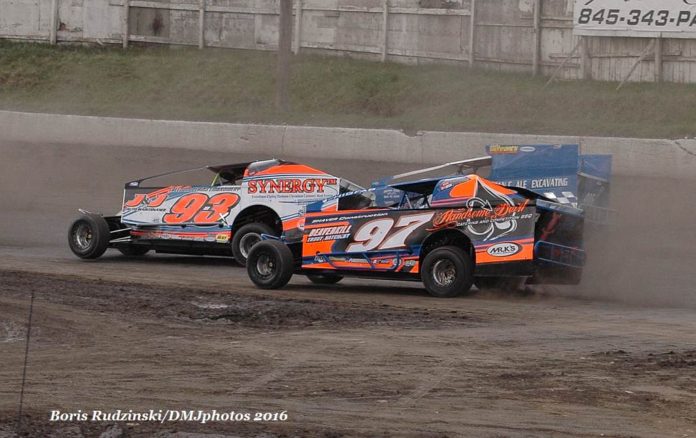 MIDDLETOWN, NY – Admission prices for 2020 weekly racing and special motorsports events at Orange County Fair Speedway have been set. “We’ve made some changes to encourage more family attendance,” says Brett Hearn, Director of Motorsports. At all our weekly Saturday night programs, children 12 and under will be admitted free to both the stands and drive-in. In addition, for the July 2 Modified Twin 50s/USAC special race meet, children 12 and under will be admitted free to the drive-in and general admission seating.” Reduced price children’s tickets will be in effect for the other special racing programs.

Adult general admission for weekly Saturday night racing is $20 for both the stands and drive-in. Seats on the Party Deck are $30 per person and $120 for a party of four. Parking on the fairgrounds is free. There is a $1.00 per car parking fee for the drive-in.

The $1750 Party Deck season pass includes a designated table and four transferable passes good for all the weekly races and listed special events. It’s a great opportunity for business hospitality activities. And with the transferable passes, it affords the Party Deck pass owner maximum flexibility to entertain both family and business associates.

Season passes are not valid for Hard Clay Open/Finale, Spring Smashtacular, Eve of Destruction, or MX events, or any special shows that may be added to the schedule.

For the competitors, OCFS Membership is $75 before April 1, $85 April 1 and after. Weekly racing pit admission is $25 Member, $35 non-member. Must be a member to receive pit admission discount. A season pit pass is $570.

Complete schedules, admission pricing as well as membership and season pass application forms for all events except Eastern States Weekend can be found on the Orange County website: www.orangecountyfairspeedway.net or at the speedway office during regular business hours.

Orange County’s 70th consecutive season of weekly stock car racing gets the green flag on Saturday, April 4 with the “Orange County Kickoff 50,” a 50-lap feature for the Big-Block Modifieds. Sportsman, Rookie Sportsman, and Street Stocks will also be racing.