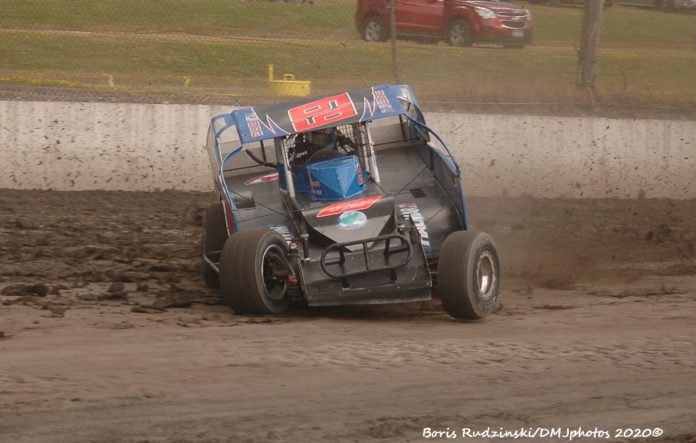 MIDDLETOWN, NY – The United Rentals DIRTcar Big-Block Modifieds will be racing for enhanced prize money during their next two outings at Orange County Fair Speedway in Middletown, New York. On Saturday, June 27, the winner of the 30-lap feature race for the ground-shaking Big-Block Modifieds will earn $5,000, a 67-percent increase over the standard weekly first place money. Then just days later, on Thursday, July 2, action returns to the historic five-eighths-mile clay speedway for a spectacular doubleheader program featuring both the United Rentals DIRTcar Big-Block Modifieds and the Rapid Tire East Coast USAC Sprint Cars. The Modifieds will compete in a pair of 50-lap feature races, each paying the victor $5,000. Should any driver sweep the night, winning both Modified features, there’s a $5,000 bonus, making it a $15,000 payday for 100 laps of racing! On both days, qualifying races will set the fields for the feature races.

Orange County’s Sportsman and Street Stock divisions will be part of the excitement with qualifying and feature races on June 27.

The July 2 pre-Independence Day race meet will mark the first appearance at Orange County for the 360-cubic-inch, non-wing Rapid Tire East Coast USAC Sprint Cars. Theirs will be a complete program of qualifying events leading to a feature race.

Banner fields are expected both June 27 and July 2.

While the grandstands remain closed, in the next step towards totally reopening, the Orange County Drive-In section will be open for same day ticket sales for June 27 at $20 per adult, $16 seniors, children 12 and under free, and a $1.00 car charge. All unreserved Drive-In slots are open. Fans wishing to reserve a particular Drive-In space must pre-register with the speedway office. The cost is $25 per space. Drive-In ticket prices for the July 2 extravaganza will be announced later.

For fans attending in the Drive-In: With the exception of emergency vehicles and maintenance equipment, the infield will be empty, allowing an unobstructed view of the track. Race car haulers will be parked elsewhere on the grounds. Announcements and race calls can be heard over car radios at FM 107.7. The refreshment stands, restrooms, and the souvenir stand will be open.

Fans unable to attend in person, may order live multi-camera streaming of the races on the OCFS website for $20.00.

So that there are no misunderstandings, both competitors and fans are urged to read the detailed instructions posted on the OCFS website for following the protocols and restrictions required for allowing the speedway to host racing. Everyone’s cooperation will be the best assurance of allowing racing to continue for the balance of the season.

On race days June 27 and July 2, the competitor Gate 9 will open at 3:00 pm; the Drive-In will open at 4:00 pm; cars will be on the track at 6:00 pm. Pre-approved media members only will enter at Gate 1, the employee entrance. Please consult the OCFS website www.orangecountyfairspeedway.net for all the latest news and information. Race teams, call 845-342-2573 for pre-registration.