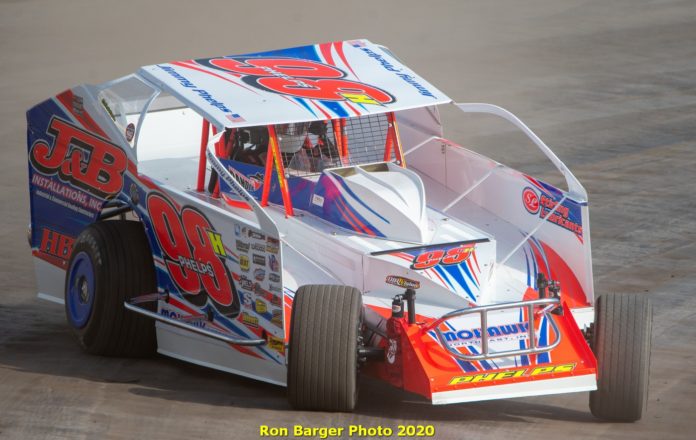 By BOBBY SWEENEY
MIDDLETOWN, NY – Jimmy Phelps dominated Saturday night’s Eastern States 75 for the 358-Modifieds, leading all but one lap to take a convincing win over Tim Sears Jr. The win is Phelps’ second in the event, pairing with his 2011 triumph and worth a $10,000 check.
Phelps got the initial jump on Sears and Billy Decker, pulling away from both in the opening laps. A lap 9 yellow saved Phelps from heavy lapped traffic, driving out to a comfortable gap following the restart. As the race neared the one-third mark, Phelps was nearing traffic again, but by this point, the bottom lane had shown to be the dominant option.
Phelps looked high on a lapped car, and Sears drove under to lead lap 26. Phelps slid in line behind Sears and in front of Decker, but the next time by, Sears went high too. Not only did Phelps regain the lead, but Decker grabbed second from Sears. Phelps made sure to not make the same mistake, riding in line behind traffic as the race neared halfway.
A pair of yellows on lap 39 and 43 produced a set of restarts, allowing Sears to regain second from Decker. In front of them, Phelps wasted little time, putting nearly three seconds between himself and Sears by lap 50. A lap 55 caution nixed his lead, but Phelps had more of the same speed when racing resumed.
Phelps looked faster the further the race ran, building a bigger lead than before by lap 60. Traffic was coming, and Phelps’ lead shrank with the lapped cars, but Phelps was able to put a couple cars between himself and Sears to seal the deal.
“When Sears got me in traffic, I learned the bottom was absolutely not worth getting off of,” Phelps said. “Fortunately, he missed it on the next corner and I was able to slide back by him. I knew I just had to be patient in lapped traffic and just tried to stay off the back bumpers of the lapped cars. I knew we had a great car, but it was just one of those interesting races.”
Once back by Sears, Phelps was all alone at the front for the final two-thirds of the event. When up front, you’re unaware of who or what is coming at you from behind.
“It’s scary, because you never know when someone will jump a lane up and pin you down, or when they’re going to run into each other in front of you,” noted Phelps. “Thankfully, with about five to go, I got by a couple cars and figured I had a gap back to Sears. That let me play a little safe in the final laps and not need to push myself into a bad start.”
With the checkered waiving, it was Phelps scoring the 75-lap win, his second in the event, with Sears, Rocky Warner, Decker, and Larry Wight the top five.