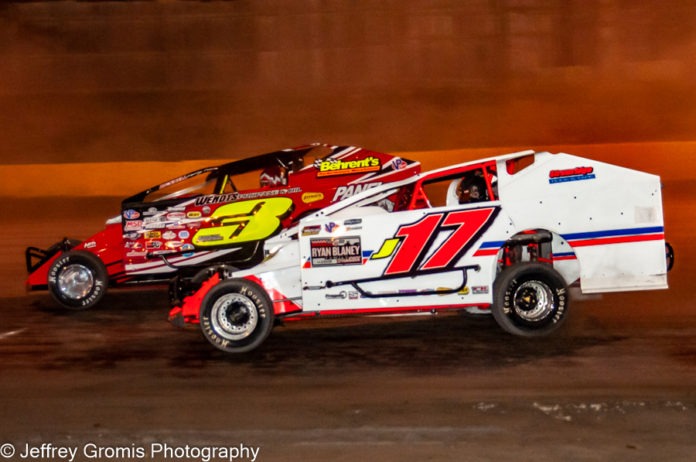 MIDDLETOWN, NY – Mat Williamson added another huge point to his auto racing resumé on Saturday night, winning the 2020 edition of Orange County Fair Speedway’s Eastern States 200. Williamson grabbed the lead about three-quarters of the way through the event, then held off late charges by Mike Mahaney and Stewart Friesen to snag a $25,000 paycheck.

Following a slow start to blow off the top layer of dust on the track surface, Larry Wight led Max McLaughlin through the opening stages of the 200-lap main event. The race quickly settled into a green-flag feel, with Wight driving away from McLaughlin by lap 20. Big movers in the first portion of the race were headlined by Friesen, snagging third on lap 28 and instantly going after McLaughlin. As McLaughlin and Friesen battled, Wight grew his lead, up to nearly a straightaway by lap 35. A few laps later, Friesen finally snuck by McLaughlin and went hunting after Wight.

Friesen got to second on lap 38, and had cut Wight’s lead in half by lap 45. Friesen didn’t stop there, catching Wight, jumping to the top, and driving by to lead lap 56. Friesen went on cruise control, putting a comfortable gap between himself and Wight and let the laps tick away. By lap 80, Wight was closing back in on Friesen, but the caution waived on lap 89 before Wight could take a serious swing at the top spot. Unfortunately, Wight’s run came to an end, heading behind the wall shortly after the caution waived.

During this caution, all lead lap cars headed to the pits and took fuel, tires, or both. A quick green and yellow on lap 104 forced another restart on lap 112. Enter Williamson, who worked to fourth by lap 115 with his new tires, then another caution and lap 122 restart allowed him to slide into second. In a repeat of last week at Port Royal, Williamson was hawking Friesen, with Friesen holding a one second lead by lap 140.

Williamson hit the afterburners, driving up to Friesen’s bumper, heading to the middle of the track, and taking the lead on lap 144. Behind them, Mahaney had filed into third, but up front, it was all Williamson. By lap 150, Williamson had already put nearly two seconds between himself and Friesen, while Friesen was falling into the clutches of Mahaney. On lap 156, Mahaney got under Friesen and took second, but had a big gap to erase to get to Williamson.

Mahaney was up to the challenge, erasing Williamson’s lead in a moment. After looking high and low, Mahaney looked to be taking the top spot, but a caution on lap 164 nixed any coming pass. Under this yellow, Friesen headed to the pits, taking on a new tire for the lap 177 restart. Williamson had a good restart, putting a comfortable lead over Mahaney in a heartbeat, but Friesen had already driven to fourth by lap 180. On lap 182, Friesen disposed of Tim Sears Jr. for third, setting his sights on Williamson and Mahaney.

With ten laps left, the top three were all getting closer, with Mahaney catching Williamson and Friesen catching both. As Mahaney was back within striking distance for the lead, Friesen and a lapped car made contact, sending the lapped car around on lap 194. Unfortunately for Mahaney, Williamson had excellent speed on restarts, pulling away in the final six laps to score his first Eastern States 200 triumph. Friesen nosed out Mahaney for second at the finish, with Sears scoring fourth and Tyler Dippel fifth.

Williamson’s win isn’t his first big one at Orange County Fair Speedway, winning $100,000 at the 160-lap Centennial event and the $15,000 checkered in the Eastern States 358-Modified event last season. The win is Williamson’s third in 200-lap events, adding on to Super Dirt Week in 2019, and Port Royal Speedway last week.

“There seemed to be a lot more varying strategies this week as opposed to last week,” Williamson said, comparing the Eastern States 200 to his win in Port Royal Speedway’s 200-lapper last weekend. “Last week, Friesen and I were on similar strategies, but this week was way different. We took tires about halfway through here, Friesen didn’t and took them late. This wasn’t a typical Eastern States, usually you take fuel and ride around for 150 laps, then race 50. This was different where we were going at it all night, and I think we took the right strategy.”

“It was interesting having the 358 race right before this,” Williamson stated. “We weren’t good in the 358 race, but didn’t think we could learn anything from it. The 358 race laid rubber, but they graded the track and we knew it would be dusty to start. The track work definitely helped, but I think a lot of us were thinking it was going to take rubber and it never did. It cleaned off and it tried to lay rubber, but for some reason never did. Luckily it gave us a track we could move on and race on, I’m hungry for these big wins and I’m glad we could grab this one.”

Friesen chased the Behrent’s #3 across the finish line for the second weekend in a row, coming up short on a late charge with a new tire. A very contrasting strategy from the one that notched him the Eastern States 200 win in 2019, but the one needed for late-race speed tonight.

“We tried to take a gas-and-go, but the track never took any more rubber,” noted Friesen. “We were pretty much a sitting duck there at the end, so we came in and grabbed a tire. I think we may have been able to grab that one if we stayed in lapped traffic, but it just didn’t go our way.”

Mahaney has been hot recently, but has somehow eluded victory lane despite a top-five percentage of around 50% in October. This race could have landed in Mahaney’s lap with a couple small differences, but Mahaney had to settle for third.

“We’ve been stacking up the top threes, but this one will be tough to swallow since we were so close,” Mahaney said. “We were going good, but just didn’t get going on that last restart. We just fired bad all night, our lap times were really slow on restarts but picked up as the laps clicked off. I’m not sure why it was that way, if I did I guess we’d be up there with the trophy, but it was just another near miss.”