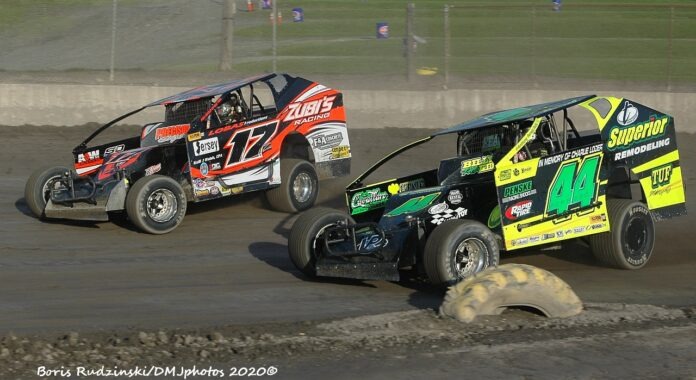 MIDDLETOWN, NY – The fiercest competition on 4-wheels this summer is at Orange County Fair Speedway in the “H.O Penn 358 Small Block Modified” racing division! Most Saturday night OCFS events in 2021 will feature the H.O. Penn 358’s as the headlining division. What happened to the Big Blocks you may be asking? They haven’t gone anywhere! Big Block Modified racing remains a staple at OCFS, with 2021 introducing a new 12 race series with special format events on Thursdays AND some Saturdays, allowing weekly racing to shine a bigger spotlight on our co-headlining Small Blocks. Oh, and with a bigger presence, comes A BIGGER PAYOUT for 358’s!

Last year OCFS hosted an average of over forty 358 Small Block drivers weekly (with over 70 showing up for Eastern States Weekend). With the growing popularity of the 358 Small Block division (and its affordability compared to Big Blocks), it’s become common for many OCFS Big Block drivers to run both Big Blocks and Small Blocks pulling double duty on many Saturday nights (Anthony Perrego, Jerry Higbie, Mike Mahaney, Tyler Boniface, Bob McGannon and more!), making competition in the Small Block events just as star studded and exciting as the Big Block division ever was. Though the 358’s represent a drop off in sheer engine power, their reduced weight makes them only tenths of a second slower than their big block brethren, producing incredibly competitive side-by-side racing.

If the fact that most big block drivers also already have a Small Block too wasn’t enough to produce a competitive field of drivers in 2021, the 358 Small Block purse will certainly solidify that. 2021’s Saturday night Small Block races will pay out $2200 to the race’s winner, with $200 to start the feature. With this healthy purse, OCFS hopes to see drivers from other classes move on up to what will now be a co-headlining division at OCFS.
When asked “why the increased emphasis on the Small Block division”, OCFS Director of Motorsports, Brett Hearn declared “Todays SB modified creates a more economical option for teams and owners. This series with the money that’s being offered will give the incentive for top drivers to get excited as well as creating interest for drivers to move up from other classes.”

With a raise to the Small Block purse also comes a raise to their point fund. 2021’s points champion will walk away with an impressive $10,000 prize. The season starts with April 10th’s Regular Season Opener (following April 3rd’s Big Block Series Race “The OC Oval Kickoff”) and ends on Champions Night (also the “Big Block Final 4” in their points series) on August 28th after 11 races. Unlike the all-new Big Block championship series, the 358 Small Blocks will retain a traditional points series structure and handicapping.

To help out our drivers who hope to compete in 2021’s Bristol Dirt race, our 358 Small Block race scheduled against it (April 24th) will be for show up points only. For those drivers who stay in Middletown, they’ll be competing for an enhanced $3,000 to win on that night!

358 Small Block drivers, do you want to test your mettle on America’s most historic speedway? 2021 at OCFS is calling, come add your name to the long list of legendary feature winners! This season marks the start of a new era for the H.O. Penn 358 Small Block Modifieds!