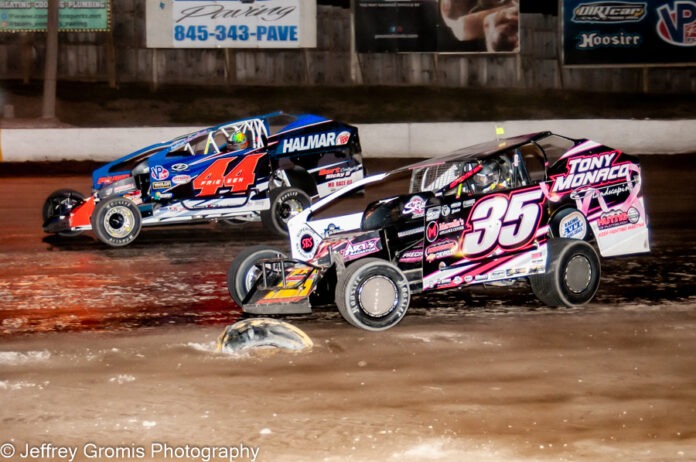 MIDDLETOWN, NY – Following the on again, off again truncated 2020 racing season, fans and competitors alike are eagerly anticipating the resumption of weekly racing at the historic Orange County Fair Speedway in Middletown, New York on Saturday, April 3. The United Rental DIRTcar Big-Block Modifieds will headline a program of preliminary qualifying races leading to the Orange County Oval Kickoff 40-lap feature race paying the winner $4,000. This is the first of 12 nights of Big-Block Modified excitement that will culminate with the new elimination format Championship night in September. Sharing the program with the Big-Block Modifieds will be the unpredictable Sportsman division in their first point night of the season.

Best of all, fans will be back! The Drive-In section will be open, as will the stands. The number of fans permitted awaits final determination by the state and local governments.  CDC protocols will be enforced.

Opening Night of weekly racing at Orange County Fair Speedway this year will continue a tradition that first began in 1950. While automobile racing traces its Orange County roots back 102 years to 1919, weekly stock car racing—the precursors of today’s Modifieds—began on April 16, 1950 and has continued uninterrupted since that memorable date.

The first weekly racing program was held on a small one-fifth-mile asphalt-surfaced track that was located inside the famed five-eighths-mile clay-surfaced speedway. Tex Enright, who later gained fame as a colorful race starter was the day’s winner, his only Orange County victory of record. Since then 42 other drivers have won season openers, led by all-time track record holder Brett Hearn, who has tasted first night victory champagne nine times.

Drivers who have raced at Orange County on a weekly basis some or all of their careers have won the vast majority of Opening Night feature races. But that hasn’t always been the case. The first outside invader to take home the season opener top prize was Hartford, Connecticut driver Dick Fletcher back in 1954. Then in the 1960s, Flemington (New Jersey) Speedway great Al Tasnady won two Orange County openers, as did Fonda (New York) Speedway champion Bill Wimble.

In 1983, C.D. Coville, from Upstate New York, ushered in the DIRT Motorsports era by winning the first race under Glenn Donnelly’s reign. “Barefoot” Bob McCreadie, from Watertown, New York, took the local boys to task in 1985, while Jack Johnson, whose home track was also Fonda Speedway, won in 1995. The Opening Night winner the past two years, Stewart Friesen, is a frequent competitor at Orange County although he has never raced a full season in Middletown.

With bragging rights on the line, three-dozen or more top Modified drivers will be looking to start 2021 weekly racing with a victory. And who knows, there’s always the possibility an outside invader will pull into the Orange County pits and win on Opening Night, adding their name to the long list of great dirt track Modified winning drivers.

Fans and competitors are reminded to visit the speedway website often for the latest track news: www.orangecountyfairspeedway.net. Media members requesting credentials should contact Bobby Armbruster at barmbr6493@aol.com as soon as possible.