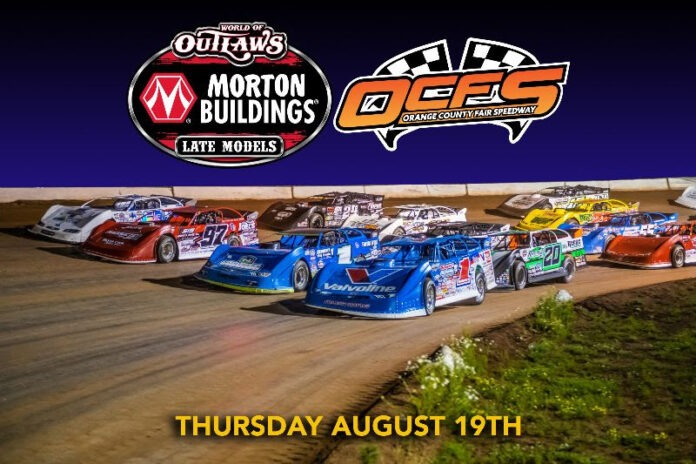 MIDDLETOWN, NY – The 2021 season at Orange County Fair Speedway is a return to form for the over 100-year-old racetrack, but it’s also the introduction, or reintroduction of many new events. Perhaps the most exciting reintroduction in 2021, will be the return of the World of Outlaws Late Models! Thursday August 19th, the Late Models, the fastest wingless cars to race on dirt, will roll into the pits at OCFS, to put on a show that race fans haven’t seen in over a decade in Middletown, NY.

The World of Outlaws Late Model Series is the nation’s premier traveling tour for dirt Late Model stock cars. A cousin of the longer-running World of Outlaws Sprint Car Series that was founded by the late Ted Johnson in 1978, the Late Model Series first ran in 1988-89 under the direction of Johnson. The series sat dormant until being rekindled in 2004 by World Racing Group and has grown each season since then to take its place as the most competitive and lucrative tour for dirt Late Model racers.

A Dirt Late Model is a full-bodied, purpose-built race car that headlines arguably the most popular dirt track division in the U.S. and Canada. There is no cubic inch limit for the aluminum-head engines they use, but most teams have power plants of 400-430 cubic inches that produce over 800 horsepower. Dozens of builders construct dirt Late Model chassis, and unlike OCFS’s regular Dirt Modified racecars, the bodies of Late Models are designed to resemble popular street-car makes from manufacturers such as Chevrolet, Ford, Pontiac, etc.

While the World of Outlaws race will bring touring drivers from that series, local talent will also be on display with a new surprise. Joining them on August 19 is another returning division to OCFS, the Pro Stocks. Like Late Models, the Pro Stocks are also full-bodied race cars. They used to race regularly at OCFS in the early 2000’s. To the disappointment of Pro Stock fans, the series dissipated at OCFS over the years, but a revival has been long talked about. This new one-off race for 2021 hopes to attract enough Pro Stock drivers to put on a great show and provide fans with at least one night of the great Pro Stock racing that they remember!

Race fans, mark those calendars for Thursday, August 19th. The school year will be way over so bring the kids as they will love the sight of full-bodied race cars! And for the adults, OCFS’s on-site bar, the 31st Lap Tavern is open for business and serving ice-cold brews and cocktails!