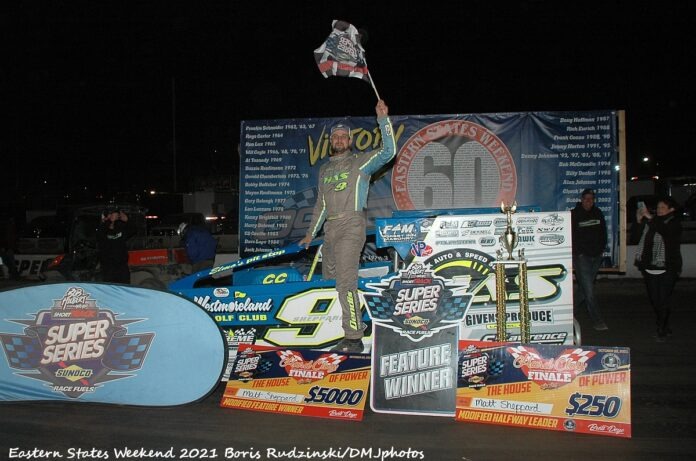 After many years of frustration racing at the Orange County Speedway, Matt Sheppard has turned the corner at the historic track. Once Sheppard received a taste of victory at OCFS back in 2019, the driver out of Savannah, NY has won at OCFS 14 times along with a track championship in 2020.

Friday night Sheppard once again dominated the competition in winning the Will Cagle 24-Lap Race of Champions Race along with the 50-lap Short Track Super Series Hard Clay Finale later that night. Sheppard’s take on the night after winning both races was a cool $10,000. Sheppard also won his heat race on Friday afternoon to lock himself into Sunday’s big $40,000 to win Eastern States 200.

In the Race of Champions race, Sheppard went by Tim McCreadie for the lead around the halfway mark and left the field in his wake to take the big win over Tim Fuller, McCreadie, Brett Hearn and Larry Wight. In the STSS nightcap, Sheppard who started on the outside pole took the lead from the onset and once again won by a wide margin over Anthony Perrego, Mat Williamson, David Schilling and Larry Wight.

Needless to say, Sheppard was a happy driver afterwards in the pits as he talked about his big wins.

“It was a heckuva night for us for sure,” said a happy Sheppard while sipping on a beer next to his winning car. “I felt like my big block car was pretty decent all day, I just didn’t know what kind of long run speed it would have and for whatever reason it turned out to be pretty darn good for that 24 lap race. The track kind of changed a little bit and maybe came towards us a little. It was a nice run and I think I was able to apply a little bit of what we learned in that race towards our STSS car.”

“This STSS car is just good, it was fast from the time we unloaded it. We made a few small changes to it, and I think it got better every time. It doesn’t always work that way but tonight it did, and that car was just a rocket ship. It’s been a while since I had a car like that, so easy to drive and so fast. That car is just rolling.”

Sheppard had such a big lead in the STSS race that you could hear him letting off the throttle down the front stretch before he even reached the starters stand.

“I knew the track was starting to rubber up a little bit and the car was so fast,” explained Sheppard. “I would push on it for a lap or two and then just back it down and roll around down there on the bottom. When your car is so good you can do that. I’ve watched Brett Hearn win a million 200 lap races running half throttle because his car rolls around that good. It’s a little different animal now than it used to be but it’s a little bit of both. The track has a lot of grip but you also need a car that will drive well when it does rubber up and doesn’t get too tight. It’s all about balance and thankfully for us we seemed to have that tonight.”

It was a great day for the Matt Sheppard Motorsports team on a track that Sheppard struggled on for many years.

“It was an awesome night for us. You come here on Friday night, and you think it’s all preliminary races and you walk out of here with over 10 grand, that’s a pretty good day. We struggled here for years, and it all came together when they changed the surface a few years ago. Since then, it has been pretty good for me.”

The night almost didn’t have a happy ending in the STSS heat race when Sheppard and Tyler Dippel came together which launched Sheppard into the air with all four wheels off the ground. Luckily for Sheppard his car was okay and he continued on to win the heat.

“Honestly, I assumed that he could see that I was under him,” cited Sheppard. “But with these Short Track Super Series doors are, he probably didn’t see me and by the time I realized that he didn’t see me it was too late. If I would have known, I think my car was fast enough to pass him and I would’ve waited to the next corner to get by him. I really thought he saw me but in hindsight with the doors on these cars, he probably didn’t. I just knew I was airborne, and I said to myself, this ain’t going to be good.”