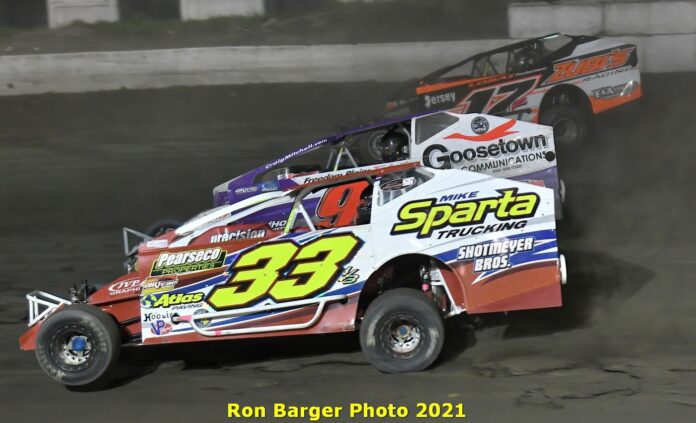 MIDDLETOWN, NY – Record-setting weekly purses and lucrative season-long point funds have generated a great deal of enthusiasm among competitors at Orange County Fair Speedway (OCFS) in Middletown, New York.  “The drivers in all our racing divisions have expressed their thanks for bringing our weekly purses up to 21st Century standards,” say Brett Hearn, OCFS Director of Motorsports. “Plus, we’ve received a great deal of interest from competitors across the Northeast considering racing with us weekly.”

On 14 nights during the season, both Modified divisions will be in action, prompting a unique $1,000 bonus to any driver who can win both feature races on the same evening.  That’s $6,000, unheard of in weekly racing!

In addition, on several nights during the season enhanced purses will be in effect.  The Big-Block Modifieds will be racing for extra money on seven occasions, topped off by the $25,000 to win Anniversary 103 race on August 11.  Earlier, on May 14, the Small-Block Modifieds will compete for $4,500 to win in the 45-lap Whitey Memmelaar Memorial race.

*The 2022 season concludes October 20-23 with the traditional Eastern States Weekend.  All racing divisions will be competing for enhanced purses, topped off by the $20,000 to win Small-Block Modified 100 and the 61st Eastern States 200, a $40,000 payday for the winner.

The 2022 racing season kicks off Saturday, April 2 with the STSS Elite Series for Modifieds racing for $25,000 to win.  Weekly OCFS competition and point season gets the green flag the following week, April 9, with a four division program—Big-Block DIRTcar Modifieds, Small-Block Modifieds, Sportsman, and Rookie Sportsman.  Saluting long-time competitor Tommy Meier, the Big-Block Modifieds will race a 33-lap feature event for $3,300 to win.

Fans and competitors are urged to frequently check the track website, www.orangecountyfairspeedway.net, as the season nears for the latest news and information.  Think spring and racing!