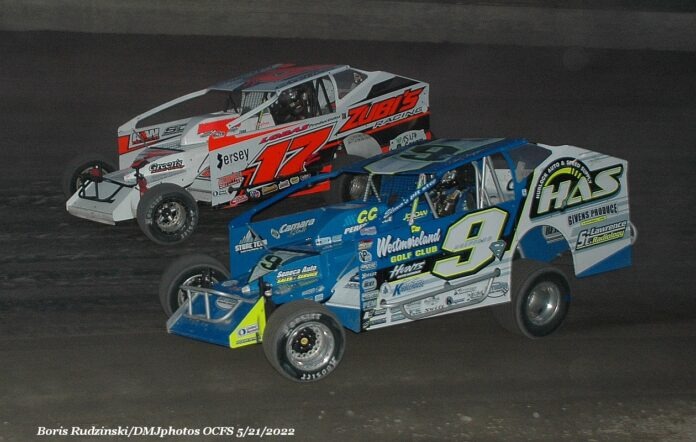 MIDDLETOWN, NY – There was a $5,000 bonus available to anyone who could sweep the two $5,000 first place checks Saturday night at the Twin 50’s event at OCFS.

After the first United Rentals DIRTcar Big Block Modified feature, It was Matt Sheppard who was the only one eligible for the 5G bonus as he scored the win in the first Twin 50.

As the laps wore down in the 2nd Twin 50, it looked unlikely that Sheppard was going to be able to grab that bonus. But some well timed cautions and some bad luck for Alex Yankowski worked in Super Matt’s favor and led him to a $15,000 payday for the driver of the 9S.

As the first 50 got underway, it was Craig Mitchell and Tanner VanDoren who led the field to green with Hollywood grabbing the top spot. An early caution was the only stoppage of the race. Mitchell led on the restart with Sheppard already becoming a threat. The 6th starting Sheppard took 3rd from VanDoren on lap 6, 2nd from Horton on lap 9, and grabbed the lead from Mitchell on lap 11. Once out front, Sheppard proceeded to pull away.

With Sheppard well out front and Horton not challenged in 2nd, the attention turned towards the rest of the top 10. Mitchell’s good run ended on lap 22 while running 3rd. Yankowski, fresh off a big victory at Utica Rome Speedway on Friday, moved into 3rd on lap 25. From that point on, there were very few changes of position. At the finish, it was Sheppard by 2 seconds over Horton with Yankowski, Tyler Boniface and Anthony Perrego completing the top 5. Max McLaughlin had some problems in his heat. But Mad Max was able to race from 19th to 6th. Mike Gular was 7th,Dillon Steuer 8th, Allison Ricci 9th and Danny Creeden 10th.

With special tire rules in effect due to the tire availability situation, teams were not allowed to change tires without penalty after the first 50. Many teams were most likely looking over their tires after the race with a nervous look.

A wheel was brought out to Victory Lane and was spun by a fan to see how many positions would be inverted. The number 4 was the invert number. This put Boniface and Yankowski up front for the start of 50 #2 with Horton and Sheppard in row 2.

Yankowski got the jump on Boniface at the start and for the longest time, had it on cruise control. With the low groove becoming the lane of choice, the top 10 running order went virtually unchanged for 41 caution free laps. As the laps wore down, it did not appear that Sheppard’s chances for a sweep were too good. Yankowski was smoothly moving through lapped traffic and Boniface was holding Sheppard at bay. But eventually, tire wear started to be a factor.

Creeden slowed on lap 41 and the caution flew for the first time in the race. After a quick stop, Danny returned to action. Sheppard was able to take 2nd from Boniface on the restart, but Yankowski was still looking comfortable in the lead. But it all fell apart for Alex on lap 46 as he slowed with a flat and retired. This put Sheppard on top. Caution was out for Perrego on lap 47 with a flat and with one lap later, 2nd running Horton also pitted with a flat. Sheppard survived one final lap restart to take the lucrative win. Gular made some good gains in the final 9 laps and took 2nd on the last lap restart. Boniface completed a pretty good night with a 3rd place finish while Creeden recovered from his pitstop to finish 4th, Ricci also made gains in the final laps to take 5th. Completing the top 10 were Matt Janiak in 6th, Bob McGannon 7th, Tyler Jashembowski 8th, Horton 9th and McLaughlin 10th.

With his wins, Sheppard has locked himself into the top 12 of the OCFS Championship playoff with Larry Wight, Matt Williamson and Dillon Steuer.

In the holdover Arkel Motors feature from May 14th, Tyler Banks recorded his first Sportsman win in an impressive run over Travis Green and Tighe Sherlock.

Jeffrey Tubbs was the early leader followed by Banks. After trailing Tubbs for 5 laps, Banks made the move around Tubbs for the lead on lap 6. The only caution of the race occurred 2 laps later as Tubbs made contact with the 3rd turn wall.

Banks led on the restart over Sherlock and Mike Sabia. As the laps wound down, Green was on the charge, taking 3rd from Sabia on lap 16 and 2nd from Sherlock on lap 18. But time was out for Travis as Banks took the win by 1 3/4 seconds over the fast closing Green. Following Sherlock in 3rd was Sabia in 4th and Greg Sleight in 5th. Rounding out the top 10 were Jared LaBagh 6th, Troy Arnold 7th, Bobby Waters 8th, Dylan Smith 9th and Cody Higbie 10th.

In the regularly scheduled feature, Drew Boniface made some good early moves and went on his first ever Sportsman feature win over Greg Sleight and Dylan Smith.

Jared Miller and Everett Haubrich were the early front runners in the feature as Boniface made gains from his 7th starting spot. Josh Allen was also in the mix. Allen made a nice move while 3 wide to take the lead. But on the next caution, he had to pit as it was reported that radio contact was lost with his car.

Allen’s misfortune put Miller back to the lead, but Boniface made the pass on the restart. Sleight moved into 2nd on lap 12 and gave chase to Boniface and made some gains on him. But at the finish, it was Boniface the winner by 6/10ths of a second over Sleight. Smith finished 3rd and Green completed a great points night with a 4th place finish. Completing the top 10 were Higbie 5th, Miller 6th, Waters 7th, Pat Mann 8th, Jake Bedell 9th and Sabia 10th.

OCFS will not have it’s usual racing action next Saturday as the Triple Threat Truck Meet will be ongoing at the speedway from May 27th-29th. Regular Saturday night racing returns on June 4th as OCFS will be hosting it’s always popular Nostalgia Night festivities. Nobody does a Nostalgia Night like Doug Dulgarian and the staff at OCFS. Come out for a night of racing and celebrating the stars from the track’s glorious history.