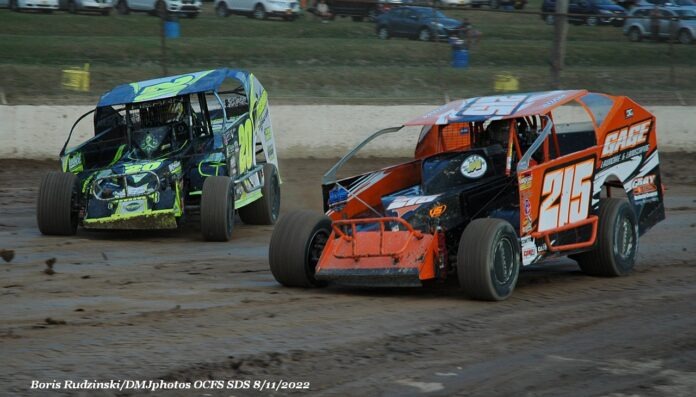 Seven different racing divisions will be sharing in the largess, with the largest share set for the Sunday, October 23 United Rentals DIRTcar Big-Block Modified Eastern States 200. The winner of the $2,000 Race for the Pole will bank $1,000 from VP Race Fuels, while the runner-up and outside pole winner nets $500 also from VP Race Fuels. Third through sixth fastest in time trials will each receive $100 gift cards compliments of Behrent’s Performance Warehouse. Each heat race victor and last chance race winner(s) also earns a $100 gift card from Behrent’s Performance Warehouse. Other Eastern States 200 awards include the $1,000 Busch Beer Halfway Leader as well as a case of Busch Beer to the winning crew from Dana Distributors; $1,000 Hard Charger Award from Superior Remodeling; $50 gift card for Most Laps Led from East Coast Speed; and the Fastest Lap in the 200, $50 from Competition Carburetion. The Wicked Truck Worx Rookie Award (best finish by a first time 200 driver) is $500. In the lap leader money, several special Memorial Laps already exceed $1,900. Finally, the award no one wants but happy to accept, the Hard Luck Award is a “growing” pot of cash from the Hard Clay Observer.

On Saturday, October 22, the H.O. Penn Car Small-Block Modified 100-lap race competitors have an expanding list of special awards, including $700 Pole Position (fastest time trials) from E. Tetz & Sons, $300 for the outside pole position from Powder Tech Powder Coating, $500 to the halfway leader from Mike Sparta Trucking, $500 for the Hard Charger in the 100 from Escape RV/Joe Barbagallo, $300 for the Rookie of the race (first time driver in the 100) from Wicked Truck Worx, $50 gift card for most laps led in the feature race from East Coast Speed, $50 for fastest lap in the feature race from Competition Carburetion, and $150 gift certificates to the top-three finishers in the 100 from Penske Shocks. Additional Small-Block Modified awards include $100 to each winner of the qualifying heat and last chance races from Leindecker Racing Engines, a number of enhanced prize money lap leader awards, a case of Busch Beer to the winning crew chief and pit crew from Dana Distributers, and $150 gift card Hard Luck Award from East Coast Speed.

Also on Saturday, October 22, the Arkel Motors Sportsman 50-lap feature race drivers have a number of special awards awaiting them. One of the largest is $500 to the Halfway Leader of the feature from Accurate Collision. And if the hallway leader also wins the race, an additional $500 bonus, also from Accurate Collision. Other announced awards include the $250 Hard Charger from Ryder’s Sealcoating, $200 Rookie Award (best finish by a first time driver in the event) from Precision Hydraulic & Oil, $50 gift card for most laps led in the feature from East Coast Speed, $50 for fastest lap in the feature from Competition Carburetion, $75 to each heat and last chance race winner from Interstate Batteries, $150 gift certificates to the top-three finishers in the feature from Penske Shocks, and a $100 gift card to the Named Hard Luck driver from East Coast Speed.

The 20-lap Eastern States race for the NAPA Northeast Parts Group Street Stocks is set for Friday, October 21. In addition to the base purse, the Street Stockers will also battle for special awards, including $200 Halfway Leader from Open Challenge Series, $100 Hard Charger from Amelia Acres Farm, $100 each heat race winner from Northeast Happy Hour with Predmore & Murns, and $50 for the fastest lap in the feature from Competition Carburetion.

Before the Sunday, October 23 Eastern States 200, the 25-lap Empire Metal Works & Overkill Trailers Pro Stock race will be contested. Announced special awards the Pro Stocks include $200 Hard Charger Award from Andy Dembeck and Troy Arnold, a to-be-announced cash Halfway Leader Award from MJK Home Maintenance, and a $50 fastest lap in the feature from Competition Carburetion. Whispering Pines Landscaping has posted $1,000 for the four-lap Pro Stock Dash for Cash to be divided $500 for first, $250 second, $150 third, and $100 fourth. Should the Dash winner also be victorious in the feature race, he/she will earn a $1,000 bonus also from Whispering Pines Landscaping.

Each day of Eastern States is jam-packed with racing action:

Thursday, October 20—Campers will be allowed on the fairgrounds beginning at 12 pm until 8:00 pm. At 1:00 PM, Big-Block Modified teams only may enter the pits. Race car inspection will take place on pit road between 2:00 pm and 7:00 pm.