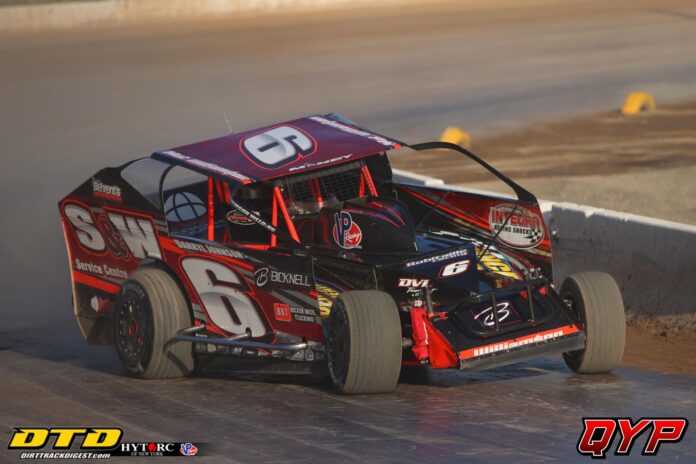 MIDDLETOWN, NY – A total of 6 Modified heat races took place during the Friday afternoon session at Eastern States Weekend and it was Max McLaughlin, Tyler Boniface, Roger Henion Jr, Bobby Food, Tim Fuller and Rick Laubach who all earned victories, and locked themselves into the 12 lap “Race for the Pole” event.

In the 12 lap ‘Race for the Pole’ it was the top two qualifiers Tyler Dippel and Mat Williamson that brought the 12 car starting field to the green flag with Mat Williamson using the high side of turns 1 and 2 to grab the lead from Dippel as the field charged down the backstretch.

As Williamson began to open the gap the field all ducked to the bottom of the speedway except for Matt Sheppard, who worked the top groove to make his way by Jimmy Phelps for the third spot just 4 laps into the event.

Once Sheppard made his way by the 98h of Phelps, he made quick work of Tyler Dippel, again using the top of turns 1 and 2 to grab second as the field came to the halfway mark.

Unfortunately for Sheppard, he was unable to gain any ground on Williamson in his family-owned S&W Bicknell machine as he took the win, and the top starting spot for Sunday’s 200 lap feature event.