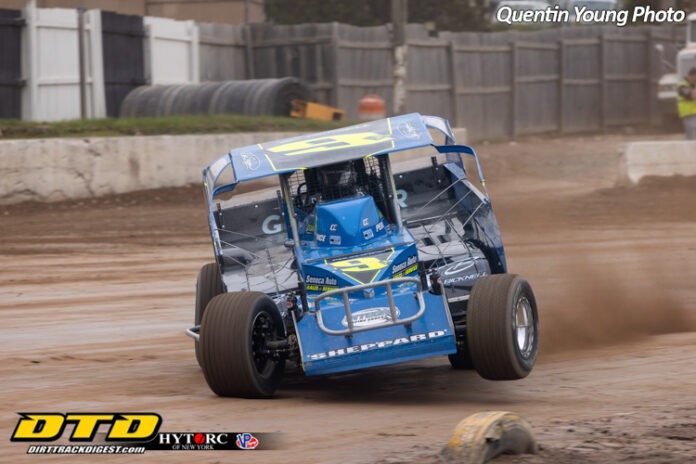 MIDDLETOWN, NY – Matt Sheppard’s impressive 2022 season continued on at Orange County Fair Speedway. After two narrow losses on Friday and Saturday nights, Sheppard bagged the big one with a win in the Eastern States 200. Sheppard flew around the top of Stewart Friesen with six laps to go en route to his second win in the crown jewel.

Mat Williamson took control of the lead at the drop of the green flag, but came under heavy fire from Sheppard almost immediately. Sheppard remained patient, utilizing traffic to slide under Williamson for the top spot on lap 20. Sheppard was very maneuverable in traffic, leaving Williamson to battle with Max McLaughlin for second until a lap 38 caution.

Under the caution, the majority of the field hit the pits. Almost all who pitted took just fuel, but Sheppard took a fresh tire as well. The result was Sheppard restarting last, with Williamson the first of the cars who pitted restarting just outside the top ten. Rick Laubach inherited P1 on the scoreboard, followed by Brett Hearn.

Stewart Friesen picked his way forward slowly and steadily after starting 37th, grabbing cars on every restart. By lap 63, Friesen had reached third, then going around the outside of Hearn for second a lap later. Friesen caught Laubach in a hurry, but settled into second for the time being. A lap 79 restart opened the top for Friesen, and Friesen went to the lead.

Jimmy Phelps worked into second soon after, but couldn’t quite stick with Friesen’s pace. Friesen slowly pulled away in traffic, while Phelps, Williamson, and Sheppard fought over second. Using a lapped car as a pick, Williamson and Sheppard got by Phelps prior to a lap 131 caution.

Using a lap 149 restart, Sheppard drove under Williamson and into second. While third on back went at it, Friesen and Sheppard drove away. Lapped traffic was brutal to the leaders, and by lap 185, Friesen looked to be driving off into the sunset. The lead was growing, and Sheppard was catching every bad break available with the lapped cars.

However, the tides turned and Sheppard rapidly closed in. Friesen had a flat left front tire and could not get by traffic well, and Sheppard was ready to pounce. With six laps left, Sheppard drove to the outside of Friesen and took the lead. Once out front, Sheppard kept Friesen at bay and reached the checkered flag first, taking his second Eastern States 200 victory worth $40,000. Friesen crossed the line a close second, with Phelps finishing third. Peter Britten rebounded from an early wreck for fourth, and Dillon Steuer completed the top five.

With his win, Sheppard completes the impressive feat of sweeping all the 200-lap events this season. Wins at Fonda Speedway, Fulton Speedway, Oswego Speedway, and now Orange County Fair Speedway have proven Sheppard has set the bar in extra-distance events.

“We saved the best for last,” Sheppard said. “We got up to second there and I thought it was a matter of track position. I didn’t think we had anything for him, he was good through the lapped cars and got away from me for a bit. I seen him clip the inside wall coming off of two pretty hard and seen his left front going down and figured we might have a shot. It was just enough to mess his car up so I could roll by.”

With a $40,000 paycheck tonight, Sheppard has won every major money race he has entered this year. Aside from the aforementioned 200-lap wins, Sheppard picked off big wins at Port Royal Speedway and other tracks as well. In race wins alone, Sheppard has added around a quarter million dollars to his bank account in the last 75 days.

“What an unbelievable season,” Sheppard noted. “Cap it off here at Eastern States, we’ve been awesome all year here at Middletown and won just about everything. Every crown jewel all in the same season, just a dream come true.”

For the second time in two weekends, Friesen sees a big win slip through his hands and into Sheppard’s. Friesen started deep in the field after needing to run a consolation race, but reached the front before halfway.

“I hit the wall and got a flat,” Friesen stated. “Just trying too hard, Matt was turning up the heat there. Trying too hard to clear a lapped car, got by a couple of them cleanly, then got to one and couldn’t figure out where he was going to go. I got into one at a weird angle, just trying to square him up to get a run off of two, but just clipped the jersey barrier. That was kind of it, Matt got by me and had the same trouble, it’s just unfortunate.”

Phelps had a quiet race, but ended up near the front of the field when it mattered most. Ultimately, Phelps was able to hold off Britten in the final laps to lock down the final podium spot.

“We had a good car all weekend, we unloaded well and didn’t have to take too big of a swing at it,” said Phelps. “The track kind of shined up like we assumed it would, and these guys are tough to beat. Third isn’t anything to hang our heads about, we’ll just keep digging, keep working hard and trying to get a little faster to mix it up with them some more.”