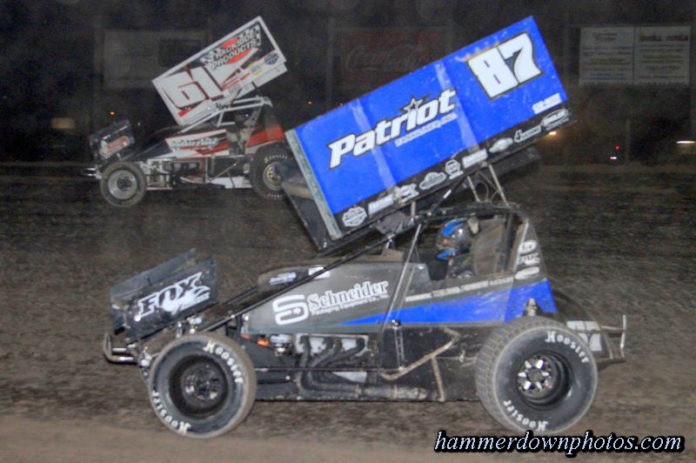 SYRACUSE, NY – It’s been since October 22nd that he winged warriors from the Lucas Oil Empire Super Sprints (ESS) has graced the dirt surface. That date they were at the Outlaw Speedway and this Friday they return to the Dundee, NY oval to see the first green flag waved on the 35th season. Then on Sunday it’s the first ever Gladiator Twin 20’s at the Utica-Rome Speedway.

Steve Poirier capped off a record breaking season with his 7th ESS title in 2016 and the title defense begins. Poirier topped Mike Woodring on the all-time win list and now can he make it a record tying eighth championship which is the next Woodring tally.

The list of title contenders is long and stout with Jason Barney leading the way. The Brewerton, NY star also had a season to remember and if it wasn’t for one of the best years in ESS history, the 2016 championship could have very well been his. Names such as Paul Kinney, Matt Tanner, Parker Evans, Chad Miller, Coleman Gulick, Paulie Colagiovanni, Matt Billings and Brandon Kidd will be on hand looking to have ESS title hopes.

With the hefty $3,000 to win and $300 to start purse as a part of the Outlaw Spring Nationals, fans can expect Mark Smith, Davie Franek, Robbie Stillwaggon, Danny Varin, Jared Zimbardi, Billy VanInwegen, Jonathan Preston, Pete Richardson, Robbie Shuttleworth, Jordan Thomas, Keith Granholm and the new breed on the ESS tour in Alex Vigneault and Brett Wright along with many others.

The night kicks off with the E&V Energy timed hot laps, followed by the Car Mate Trailers heat events with the Lane’s Yamaha/Cobra Coaches Dash and the Lacaillade Masonry B-Main all leading up to the 25 lap A-Main. The entire night is being sponsored by ESS tour contributor Scorpion Security Products.


On Sunday, it’s double the excitement with the first running of the Gladiator Twin 20’s. Two sets of qualifying will lead up to two 20 lap A-Main’s paying $1,500 to win and $150 to start each! Adding to the fun is the Orange Crate Brewing Company Back Row Challenge where the winner of the first event could earn an extra $1000 by starting last in the second.

Utica-Rome is once again a huge supporter of the Lucas Oil Tour holding the traditional three holiday full point events along with the special Tuesday night of Super DIRT Week Cole Cup.

Many of the ESS faithful will head to Vernon on Sunday with the addition of Chuck and Kelly Hebing, Jeff Cook, Bobby Varin, Mike Mahaney, Cory Sparks, Dan Douville and more.

Tires and Fuel will be on hand at both events from Donath MotorWorx and parts will be available from Panther Frameworx Speed Shop.