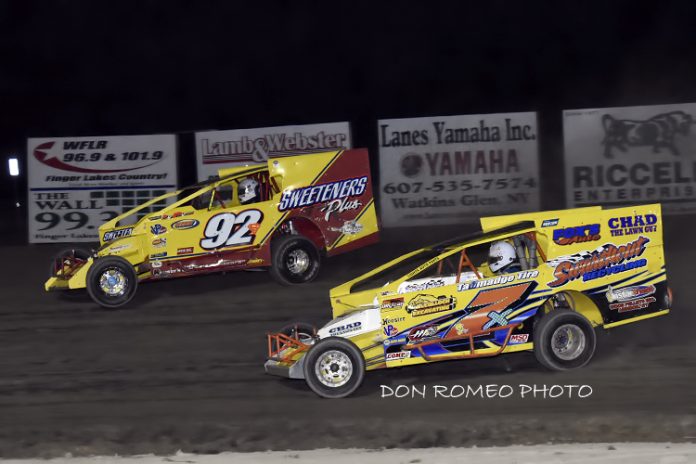 DUNDEE, NY – Parmenter Automotive presented Family Autograph Night at Outlaw Speedway on a clear but muggy evening. 115 race cars filled the pit area, with many drivers bringing their cars to the front stretch during intermission for an autograph session that was well received by the fans in attendance.

Kyle Coffey leapt into the lead of the 30-lap Friendly Dodge Outlaw Modified feature as Steve Paine and Matt Sheppard tore through the pack from their mid pack starting spots. Paine motored past Coffey for the lead on lap 8 and Sheppard grabbed the runnerup spot one lap later as Alan Johnson moved into the top five. Johnson moved past Coffey for third at lap 15 as Sheppard started to reel in leader Paine. The yellow flew for a Lee Bills spin on lap 16, which tightened the field.

Sheppard used the outside to grab the lead on the restart and pulled away from Paine for his sixth win of the year. Paine and Johnson were followed across the line by Kyle Coffey and Tyler Siri.

After a lap 1 scramble kocked out front row starter Eric Williams, the 20-lap Crate Sportsman main event saw Josh Keesey grab the top spot over Brian Fish, with Rob Bussey moving to third. Bussey grabbed second and chased after Keesey while Fish battled with Todd Heward for third. As Karl Comfort moved into the top five at lap 10, Bussey headed pitside with issues, moving Fish and Heyward into second and third. Fish used the outside to take the lead on lap 14 with Heyward in tow. That duo broke away from the field and Fish had a half a straightawy at the finish for his first Crate Sportsman win of the season with Heyward in second. Keesey, Doug Smith, and Karl Comfort rounded out the top five.

In the 20-lap Crate Late Model feature event, Chris Fleming jumped out to the early lead over Rich Michael Jr. Brian Knowles moved into second on lap 7 Fleming had mechanical problems one lap later and dropped out, giving the lead to Knowles. Knowles drove away to a comfortable lead to take the win over Michael Jr, Brad Smith, and Fleming.

The 20-lap Street Stock feature started with James Kreidler III taking the early lead. Glenn Whritenour had moved into second by the first caution on lap 4 and took the lead on the restart as Dan Mazzarese moved past Kreidler into the second spot. As Whritenour led, Mazzarese battled with Jared Hill and Bob Buono as Chuck Winslow, who started in the rear after problems in his heat, cracked the top five. Mazzarese pulled up with a flat tire on lap 12 and Buono dropped out under the caution, moving Jared Hill and CJ Guererri into the top 3. Guererri took second on the restart, but Whritenour could not be caught, taking another win in the competitive division. Guererri, Hill, Winslow, and Quinn Sutherland rounded out the top five.

The 4 Cylinder feature started with an incident on the frontstretch that sent Adam Delgrosso hard into the front stretch wall and fence. After a lengthy delay for cleanup, the race resumed with Joey Clark leading the opening laps while facing stiff challenges from Erica Bell and Ray Hyer. Bell took the lead on lap 9 and Hyer slipped into second. The yellow flew on lap 13 when Scott Lehman’s engine blew, laying fluid down on the racing surface through turns one and two. Hyer grabbed the lead at that point and pulled away for another win as Bell battled with Mike Stone and Chad Ayers. At the line, Stone had moved to second, followed by Bell, Ayers, and Clark.

4 Cylinder heats were won by Adam Delgrosso, Ray Hyer, and and Chad Ayers.

Dave Decker led the first half of the Farmers Insurance/Marion Decker Agency Hobby Stock feature, but Marc Minutolo took the lead at the halfway point and motored to another win over Buck Mills, Decker, and Allison Pierce.

In the Winners Circle Deli Bandit feature, Braden Buchanan battled Austin LaBar till Buchanan slid high on lap 5 and brought out the caution. Buchanan tangled with Steven Perkins III on the restart and they both went hard into the turn 2 wall. Both drivers were OK. Cole Youse took the lead on the restart to take another win over Austin LaBar, Perkins III, Buchanan, and Matt Irwin.

The Classics on Dirt Vintage Modifieds made a visit at Outlaw Friday night as well, with local competitor Mark Schenk beating Rob Casti and Frank Blanchard to the line for the win in thier 12-lap feature.

Due to the lateness of the our and the amount of time required to handle the 4 Cylilnder crash, the program was called complete at that point. The IMCA Modified feature will be made up on July 14th.

4 Cylinder heats were won by Adam Delgrosso, Ray Hyer, and and Chad Ayers.

Racing continues at Outlaw Speedway Friday night, July 14th, when 1 on 1 Spectator Races will be the special added attraction, along with the makeup feature for the IMCA Modifieds. Racing begins at 7pm. For more information, visit www.outlawspeedwayllc.com.