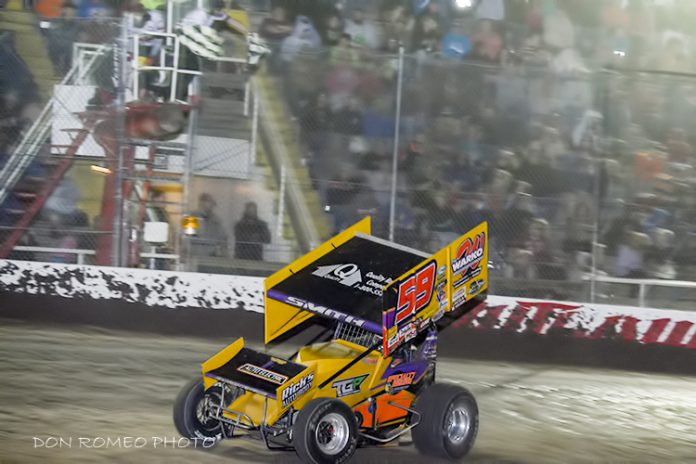 DUNDEE, NY – Nearly sweeping the entire Arctic Cat All Star Circuit of Champions program, the “Kunkletown Kid” Ryan Smith opened his weekend trek through the Empire State with a victory at Outlaw Speedway. The $5,000 triumph, Smith’s first in the state of New York, was his first of the 2017 season during Arctic Cat All Star Circuit of Champions competition, increasing his career win total to four with the Series, also ending a near-two year victory lane hiatus.

Despite his near-sweep during the Arctic Cat All Star Outlaw Speedway debut, Smith’s victory was not conducted in easy fashion. The Kunkletown, Pennsylvania, native survived multiple challenges from former World of Outlaws Craftsman Sprint Car Series champion, Sammy Swindell, during the 30-lap program, actually exchanging positions with the National Sprint Car Hall of Fame inductee on three different occasions before settling into the top spot for the final time on lap 20. To make matters more dramatic, Smith was forced to withstand not just one, but two main event restarts with a pair of laps remaining. Smith held on, followed to the final checkers by Alvada, Ohio’s Chad Kemenah.

“Feels great to get the monkey off of our backs and get this first win out of the way,” Ryan Smith explained in victory lane, pilot of the Tom and Sherry Leidig/Warko Group/Auto Electric of Jupiter, FL/Specialty Rigging/No. 59. “There are a lot of great people who help make this team possible. It gets demanding at times, but this makes it all worth it. Hopefully we can do it a couple more times this weekend.”

Ryan Smith and Sammy Swindell led the field to green on Friday night at Outlaw Speedway. Swindell earned the early advantage, leading Smith and Caleb Helms by the flagstand for the first time. Swindell stayed in control at the front of the field for the first 12 circuits, encountering traffic as early as lap five.

Smith, who never lost track of Swindell in traffic, made his first bid for the top spot on lap 13, driving under Swindell at the entrance of turn three. Swindell eventually returned the favor on lap 18 with a move under Smith at the entrance of turn one. Despite Swindell’s attempt at running away from Smith in traffic, the “Kunkletown Kid” never allowed Swindell to extend his advantage, ultimately getting back by the Jared Zimbardi-owned No. 35S as the pair drag raced toward the start/finish line on lap 20.

The main event’s first caution appeared on lap 29 which set up a two-lap dash to the finish. A caution during the first restart attempt would force the field to try again. It was then when Chad Kemenah made a run on Sammy Swindell to takeover the second position. The five-time and defending Arctic Cat All Star champion attempted to make a bid for the lead one lap later, but time was out.

“Hats off to Ryan Smith and his whole team. Those guys work really hard and they deserved this one,” Hunter Racing’s Chad Kemenah explained. “We tried to get a run on Ryan there with a lap or so to go. I got around Sammy [Swindell], so I figured I had a chance. We’ll take this and move forward. We have a big race coming up in Iowa that we are excited about. We’re going to keep an eye on that.”

The Arctic Cat All Star Circuit of Champions will continue their weekend march through the Empire State with a Saturday night visit to the Orange County Fair Speedway in Middletown, New York. The 5/8-mile speed plant, arguably the largest oval on the 2017 Arctic Cat All Star campaign trail, will feature “America’s Series” for the first and only time in 2017. A top prize equaling $10,000 will be handed out on Saturday evening, the peak of a purse exceeding $32,000.

Orange County Fair Speedway will open pit gates and drive-in gates beginning at 3:00pm, followed by main gates at 4:00pm. A mandatory Arctic Cat All Star drivers meeting will be held at 5:30pm, followed by hot laps at 6:00pm, sharp. More information can be found online at www.orangecountyfairspeedway.net.

About the Arctic Cat All Star Circuit of Champions:
All Star Enterprises, LLC, wholly owned by Tony Stewart, d/b/a the All Star Circuit of Champions, is a winged sprint car series. The All-Star Circuit of Champions Sprint Car Series is one of the oldest traveling 410 sprint car organizations and is a staple of grassroots, open-wheel racing.  Formed in 1970 by Bud Miller, the series has largely been considered the first ‘outlaw’ Sprint Car organization of the modern era. After a 10 year stint as owner of the All Stars, Miller passed control of the series to Bert Emick in 1980; a reign that would continue through 2002. Guy Webb then purchased the series from Emick in the summer of 2002 and served as the series President for the next 12 years.  Motorsports entrepreneur Tony Stewart agreed to terms with Guy Webb to become the sole owner of the original winged sprint car tour in January of 2015. 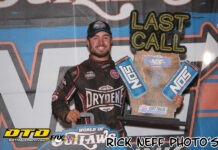