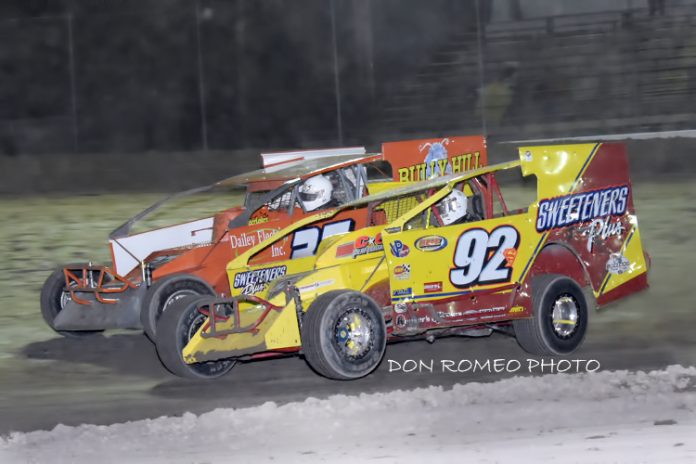 In the 30-lap Friendly Dodge Outlaw Modfiied main event, Eric Fisher charged past Dillon Groover for the lead with Jusitn Wright and Tyler Siri moving into second and third in the opening laps.  Wright took the lead from Fisher on lap 8 as Kyle Coffey and Matt Sheppard battled for fourth.  Sheppard picked off cars one by one to move up to the second spot at the halfway point, and was able to gain track position when the first yellow flew on lap 17 whe Matt Roberts had trouble and stopped in turn one. After a quick restart and caution, Sheppard passed Wright for the lead on lap 20 as Steve Paine slid past Fisher to move up in the top five.  Paine made a wicked move on the restart to snag third from Siri as Sheppard pulled away.  At the finish, Sheppard had another win, followed by Wright, Paine, Alan Johnson, and Eric Fisher.

The 25-lap Crate Sportsman feature began with Zach Zigenhagen taking the top spot and pulling a four car breakaway with Dean Laughlin, Mike Buchanan, and Chris Silvers.  Buchanan moved to second and on lap 8 challenged for the lead.  Silvers joined the battle at the halfway point as Dale Welty and Tom Collins Jr fought for the fourth spot.  Buchanan used a slower car to move past Zigenhagen for the lead on lap 15 and Silvers snagged second one lap later.  Welty took third on lap 20 as Buchanan and Silvers pulled away.  Collins made a great move on the inside to take third with three to go.  At the checkers, Buchanan had his first win of the season over Silvers, Collins, Welty, and Chris Fisher.


The Crate Late Model feature saw Kurt Stebbins grab the top spot while Brian Knowles and Chris Fleming battled for second behind him.  Stebbins gapped out for the win, with Fleming and Knowles continuing the battle for second to the checkers, with Fleming grabbing the spot over Knowles, with Brad Smith taking fourth.

The Crate Late Model heat was won by Chris Fleming.

In the 20-lap IMCA Modified feature, Scott Sebring led until Brad Smith took over a few laps in.  There was some wild action through the top ten as Bob Maynard battled with Sebring and Glenn Whritenour and Phil Yaw, Bradon Smith, and Shawn Bruce all traded spots back and forth.  After a lap 5 yellow for Jake and Rich Karlnoski and Mike and Tyler Stoddard’s tangle on the backstretch.  Several cautions happened in the race’s middle stages, allowing Whritenour to move into second behind Smith.  Whritenour had oppotunities on late race restarts, but Smith held the upper hand and brought home his second feature win of the year over Whritenour and Phil Yaw.  Mike and Tyler Stoddard came back from the early wreck to take fourth and fifth.

Jayson Smart grabbed the point at the start of the 20-lap Street Stock feature as Gene Balmer grabbed second while Allison Teed battled with James Kreidler III, Carl Cleveland, Bob Buono, and Quinn Sutherland.  Smart and Balmer dueled for the lead until the yellow flew on lap 9 for trouble with Lavern Knickerbocker and Kurt Stebbins on opposite ends of the track.  Balmer took the lead on the restart and pulled away as Buono battled with Smart for second.  Both Buono and Sutherland passed Smart on lap 13, and another yellow flew on lap 15 when Carl Cleveland spun out while running in the top five.  Glenn Whritenour charged through the field after starting on the final row and found himself fifth when the green flew with five to go.  Balmer held off all charges for his first win of the year, followed by Buono, Sutherland, Whritenour, and Dave Matwiejow.  Following post race inspection, both Buono and Sutherland were disqualified.

Billy Bowers grabbed the lead at the end of lap 1 of the 4 Cylinder feature as Ray Hyer moved from 12th to 2nd before the first yellow flew on lap 5.  Hyer snagged the lead one lap after the restart and began to pull away as ShiAnn LaBar battled with Erica Bell and James Kreidler III for the third spot.  Kreidler mades his moves to grab third on lap 12.  Kreidler grabbed 2nd on the next restart and lined up behind Hyer after a lap 14 yellow for a slowing John Hand.  Kreidler and Hyer had a great battle for the lead over the final laps, Hyer held off Kreidler for another win, followed by Bowers, LaBar, and Bell.  Hyer was disqualified after failing a post race inspection.

Aaron Miller lead the first 7 laps of the Farmers Insurance/Marion Decker Agency Hobby Stock feature, holding off challenges from Dave Decker, while Marc Minutolo battled his Dad Mike Minutolo for position.  Marc suffered a flat on lap7, pitted, and returned to the fray, while Miller had right front suspension trouble and fell out on lap 8.  Decker held off both of the Minutolos to grab his second win of the season with Shawn Lloyd and Doug DeKay following.

Austin LaBar went wire to wire for his second straight win in the Winner’s Circle Deli Bandit division, despite Cole Youse’s best efforts to run him down in the final few laps.  Braden Buchanan, Jared Wakefield, and Brooke McClain rounded out the top five.

Next Friday night is Scout night, with a full Super 6 Show on tap along with a Bicycle Giveaway.  For more information, visit 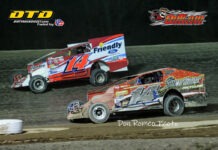