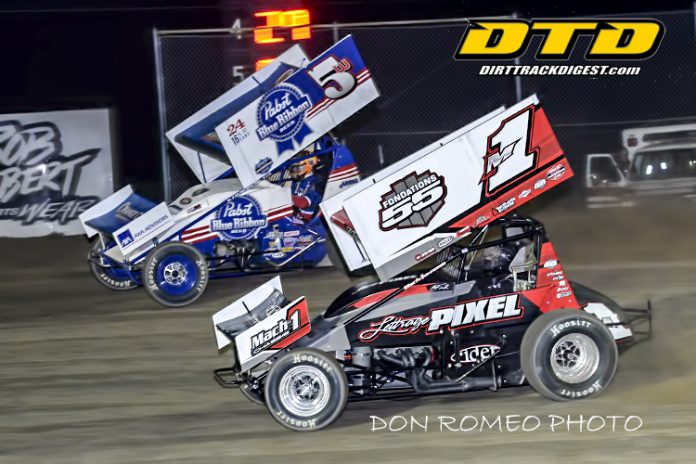 DUNDEE, NY – Under clear skies, competitors jammed the Outlaw Speedway pit area to begin the final race weekend of 2017 at the Dundee oval on the first of two days of the ‘Dutch Hoag Memorial Weekend.’

In the 25-lap Lucas Oil Empire Super Sprint main event, Lucas Wolfe outdueled Mark Smith for the lead but Jordan Thomas’s flip in turn two brought out the red just one lap in.  On the restart,  Smith took the lead again, but the red flew on lap 3 for another flip on the frontstretch by Steve Glover.  A third flip by Steve Hutchinson brought out another red at lap 5.

Smith pulled away from Wolfe on the restart as Jason Schultz took third.  Justin Barger battled past Chuck Hebing for fourth as the leaders worked through traffic.  A debris caution on lap 16 bunched the field again, and Wolfe jumped back into the lead as Shultz and Barger fought for third.  At the checkers, Wolfe took the win over Smith, Schultz, Barger, and Varin.

Pole Dash winner and the ‘B’ Main was captured by Scott Kreutter.


Casey Pavlick took the lead from Garrett Rushlow at the start of the 25-lap GRIT Hoosier Crate Sportsman Series feature with Nick Guererri moving into second.  The duo hit lapped traffic at lap 10 as Dave Marcuccilli and Rocky Warner were coming into the top five.  Marcuccilli moved past Rushlow for third on lap 14 as Guererri battled Pavlick for the race lead.  Warner cracked the top five at lap 18 as Guererri took the lead from Pavlick on lap 20 with Marcuccilli right behind.  George Sanford tangled with an infield marker tire on lap 23 to bring out the yellow and set up a shootout for the finish.  Marcuccilli snuck past both Guererri and Pavlick in the final two circuits to take the victory in a great run to the checkers.  Pavlick nipped Guererri for second, followed by Rocky Warner and Kyle Inman.

The 20-lap Crate Late Model feature saw Bryce Davis drive past pole sitter Dennis Cummings to take the top spot as John Waters and Jeremy Wonderling slotted into second and third  Waters and Davis battled over a couple of restarts, with Waters sliding into the top spot on lap 8.  Waters hit traffic on lap 13 but Davis could not close the gap on the leader.  Wonderling closed in briefly, but Davis kept him at bay over the closing laps and at the finish, Waters had the win, followed by Davis, Wonderling, Brian Knowles, and Kurt Stebbins.

In the 20-lap IMCA Modified feature, Brad Smith took the point as Richard Michael Jr worked from his 6th starting spot into second by lap 6.  On a restart after a caution for debris, Michael took the lead from Smith as AJ Ward and Brad Sites raced for the third spot.  A lap 11 caution saw Bob Maynard and Jake Maynard spin off turn three, and at the same time, Smith and Billy Ward made hard contact that knocked the left rear off the Smith machine.  AJ Ward was able to wrestle the lead away from Michael on a restart and held on for the final laps for the win over Michael, Will Ward, Ken Buck,and Myron DeYoung.

The 4 Cylinder feature saw Teddy Morseman and Chris Woodard battle for the early lead.  Morseman spun in turn three on lap 3, which triggered a multi car pileup which brough out a red flag.  Woodard pulled away on the restart with Brad Shepard joining him in a two car breakway as Bruce Kinner fought for third with Morseman and Ray Hyer.  As the leaders worked in traffic, James Kreidler III blew an engine on lap 16, setting up a restart with four to go.  Woodard held the lead to the finish and took the win over Shepard, Ray Hyer, Morseman, and Bruce Kinner.

A pair of dash events were also held for the Street Stock and Friendly Dodge Outlaw Modified divisions, with the winners getting guaranteed starting spots for tomorrow’s events.

In the Street Stock Dash, Dylan Ceece and Kurt Stebbins battled for the win with Ceece holding on for a one car length victory.  In the Friendly Dodge Outlaw Modified Dash, Justin Haers led until turn two of the final lap when his car broke, giving Alan Johnson the victory.

Racing action continues at Outlaw Speedway Saturday, October 21st with the second day of the Dutch Hoag Weekend, featuring the ‘Gunslinger 70’ for the Friendly Dodge Outlaw Modifieds, the Street Stock ‘World 100’, plus several other divisions..  For more information, visit www.outlawspeedwayllc.com 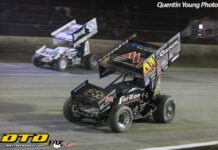