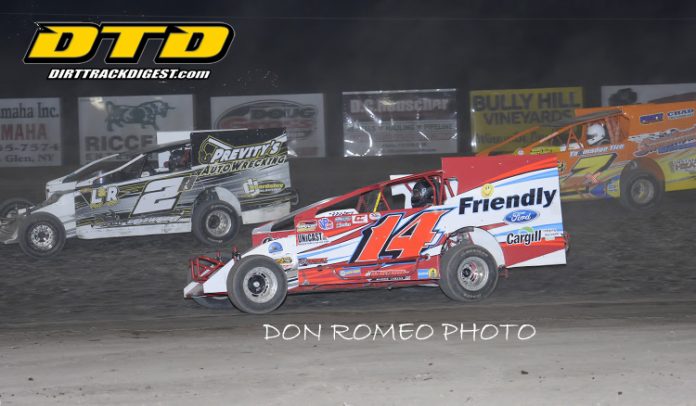 DUNDEE, NY – After completing a successful 2017 race season, the management team at the Outlaw Speedway in Dundee, NY has not rested on their laurels. An aggressive 2018 race schedule has been released featuring most every type of race cars from a vast array of sanctioning bodies which will definitely wet the racing appetite of most race fans.

“We learned a lot over the past couple years,” stated Outlaw Speedway owner/promoter, Tyler Siri in a recent interview at his Horseheads, NY office. “Of course we have a weekly routine for our Friday night regular racers as that is our meat and potatoes, however we have become more diversified with our special events some of which are mid-week shows as well as two night weekend specials and that opens things up to a totally new group of race fans in addition to our regulars.”

The 2018 season at Outlaw will open with two practice dates on Friday, April 6 and 13. Both dates feature free grand stand seating with a minimal pit admission fee to cover insurance costs. Then on Friday, April 20 Outlaw Speedway will swing the gates open for their 3rd consecutive season as the Lucas Oil Empire Super Sprints will travel to the Yates County speed plant. Also on the Spring Nationals card will be a GRIT Series Crate Sportsman Series Special, 4 cylinders, Street Stocks as well as the IMCA Modifieds. Saturday, April 21 has been listed as a makeup date should unforeseen circumstances become an issue.

The ever popular Tony Stewart All Star Sprint Series, which made their maiden voyage to Outlaw Speedway in 2017 will be back in 2018 with not one, but two events. The “17” show was the largest ever attended race event at the Dundee, NY speedway in history and fans are encouraged to mark Friday, June 8 as well as Friday, September 14 on their calendars for both of these high powered events featuring many of the top 410 Sprint Car pilots in the country. Stewart has been a big fan of the Outlaw Speedway since he first visited the place as a guest of then track owners, Lin and Cindy Hough nearly two decades ago and he always looks forward to returning to Dundee whether as a fan, driver or series promoter.

After a one year absence, Brett Deyo and his Short Track Super Series will return to Outlaw Speedway for a Wednesday, June 20, 2018 event. Siri is elated to have Deyo and his traveling series back at Outlaw and it is anticipated that a record number of Big and Small Block Modifieds will be in attendance for this high paying event offering a massive contingency program. In return, Brett Deyo knows the significance of having his series compete at a venue like Outlaw Speedway, a stand on the gas, multi groove, high speed oval.


In 2017, Outlaw Speedway played host to a Super DIRTcar Series event which played to a packed house. The top Modified pilots in the northeast overwhelmingly said they wanted to return in “18” so it was relatively easy for Siri to negotiate a return engagement for the popular DIRTcar Series which this year is booked on Tuesday, July 10. Multi time DIRTcar Series and reigning Outlaw Speedway Track Champion, Matt Sheppard will lead the charge of a who’s who list of top Big Block Modified drivers.

July 27 and 28 will feature the two night Summer Nationals featuring the 360 Sprints on both nights. Friday will also feature a multitude of additional classes. $4000 to win Modified’s, GRIT Sportsman, Street Stocks, IMCA Modified’s and 4 cylinders will be on the card for Saturday. According to Siri, “What a great way to spend a weekend in July. Bring the camper and let the party begin!”

Another two night gig will happen with the Fall Nationals set for September 21 and 22 with the first ever appearance of the highly acclaimed and nationally known World or Outlaw Late Model Series seeing action on Friday night. A slew of other divisions of competition will also be in action over the two nights including the Patriot Sprint Tour. Whether it be the full fendered WoO Late Models or the open wheel 360 Sprints, there is something for everyone during this double header weekend.

The final multi night program will bring down the curtain on the 2018 campaign at the Outlaw Speedway as Tyler Siri and company will pay tribute to perhaps one of the best Modified pilots to emerge from northeast quadrant of the United States as the Dutch Hoag Memorial Triple 7 Weekend will wrap up the season. A member of the DIRT Motorsports Hall of Fame and a 5 time winner of the Race of Champions event on the legendary Langhorne Speedway, Hoag was a master on both the pavement as well as dirt.

Dotted in the 2018 schedule of events are other special events including the 2nd Annual Gary Montgomery Memorial for the Rush Crate Late Model Series. Jeff Searles Memorial Night and a Huge Fireworks Program to commerate our National Holiday. Sprinkled throughout the schedule are other special nights for Legionnaires, Mothers, Veterans and Scouts.

Without a doubt the 2018 Outlaw Speedway Schedule of Events will be one of the more aggressive and diversified schedules, yet making sure that the local racers have more than ample opportunities to compete so make your plans now to be a part of New York States Finger Lakes Regions premier race venue, the Outlaw Speedway in Dundee, NY.

As always camping is encouraged at the Outlaw Speedway with plenty of free parking.