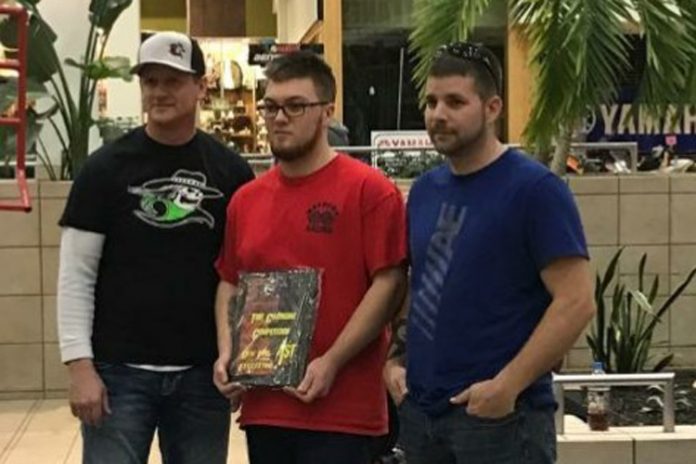 DUNDEE, NY – For three 3 full days the Arnot Mall in Big Flats, NY played host to the Annual Outlaw Speedway Car Show presented by Lane’s Yamaha of Watkins Glen. Race cars representing virtually every class that will compete at Outlaw Speedway during the 2018 race season were spread throughout the spacious isle ways of the Arnot Mall.

The crews and teams that spent countless hours in their respective garages over the last several months should be commended on their hard work in preparing their immaculate equipment for the show. The graphic art work was a thing of beauty on every car that was present at the event including a pair of vintage race cars, no less than five pavement machines that will compete at the Chemung Speedway and an awesome display of microds.

The bulk of the show featured a multitude of machines representing Outlaw Speedway, everything from 4 cylinders to Street Stocks to IMCA Modifieds to Hobby Stocks to Crate Sportsman to the Mighty Modifieds.

The highlight of the show occurred all day on Saturday with a “mall wide” egg hunt with several thousand plastic Easter eggs scattered throughout the Arnot Mall complex with what seemed like as many youngsters filling their Easter baskets. The highly anticipated Driver Autograph Session started at 6:30 pm with such notables as Matt Sheppard, Steve Paine, Tyler Siri, and Eric Fisher representing the Friendly CDJR Modified Division. Glen Whritenour who was able to do the unthinkable by winning two track titles in two different classes of competition at Outlaw Speedway in 2017 was there to represent the Street Stock and IMCA Modified Classes. Brian Knowles from nearby Corning plans to make Outlaw his Friday night race venue for his potent Crate Late Model after claiming the Doug Gross Construction Track title in 2017. Referred to as “Pork Chop”, Knowles was onboard to sign autographs along with the father/son duo of Todd and Mike Stone. Both plan on being back in their respective classes for the upcoming season with father Todd in his familiar IMCA Modified and son Mike back to defend his 2017, 4 Cylinder track title. Second generation pilot, Brandon Buchanan will compete fulltime in the 4 Cylinder Division in “18” and was well received by those in attendance as was the “17” Hobby Stock Track title holder, Dave Decker who had his entire family along for the autograph signing. It should also be noted that thru the family owned Marion M. Decker Farmers Insurance Agency, they will once again provide season long sponsorship for both the IMCA Fastshaft as well as the rapidly growing Hobby Stock Divisions.

Immediately following the autograph signing Marcus Dinkins rolled his beautiful #17 Big Block Modified into the Arnot Mall Center Court area for the Dew Pro Excavating Tire Changing Competition. Eight, teams of 2 attempted to change the right rear tire against the clock on the Dinkins machine. After the first round the field was whittled down to the top three and following the second and final round it was the team of A.J. Potrzebowski and Jordan Matthews picking up the winners plaque. Placing a close second was the team of Dave Matwiejow and Cobb Cornish. Track owner, Tyler Siri and his jackman, Greg Turner led the competition after round one, but faded in the second round after a stubborn jack slowed the process. Congratulations to all that competed in the event.

Perhaps the high point of the car show was the Outlaw Speedway Monster Truck that proudly was displayed in Center Court. Hundreds of curious kids and adults were allowed to climb aboard the mammoth sixteen passenger truck which was totally reconstructed and repainted during the past off season and will be ready to give tours of the facility when the track opens for the Spring Nationals on April 20, 2018.

It was an extremely well attended 3 day event and plans are already underway for a return engagement in 2019 for the Outlaw Speedway Arnot Mall Car Show.

For more information relevant to the track including the 2018 schedule of events, directions to the speedway, contact information and much more just click on at www.outlawspeedwayllc.com.