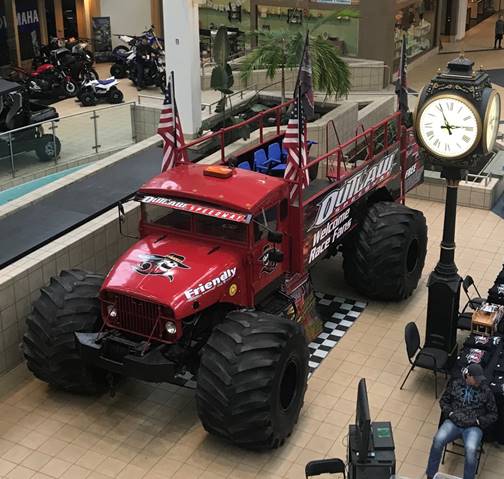 DUNDEE, NY –  A very unique opportunity for race fans to tour the Outlaw Speedway waits as the totally renovated 16 passenger Monster Truck, presented by Friendly Dodge, Chrysler, Jeep, and Ram will be in operation for the season opening Spring Nationals set to go on Friday, April 20, 2018.  When the main entrance gates open at 4:30 fans of any age will be allowed to climb aboard the Outlaw Speedway Monster Truck where they will tour the entire facility including the pit area at the popular Yates County New York oval.

“My crew guys went thru the entire Monster Truck over the winter months which including a completely fresh paint and lettering job, stated Outlaw Speedway owner, Tyler Siri.  There aren’t many venues offering this unique opportunity for fans to observe the entire facility where they can get a totally different view of what goes on behind the scenes including seeing the crews working on the cars in the pit area as well as taking a lap around the 4/10 of a mile clay oval.”

Soon after the gates open at 4:30 pm on April 20 right thru the final checkered flag of the 2018 season in October those interested will be allowed to ride the Outlaw Speedway Monster Truck and get a real feel as though they were actually in a competitive Monster Truck.

Siri went on to say that, “This is a wonderful thing for the kids as they get a high up look at the surroundings and at the same time the Monster Truck goes thru the pit area where they can see what happens on the other side of the track.”

The 3rd Annual Spring Nationals is set for Friday, April 20 with pit gates opening at 3:00 pm.  This is being highly touted as one of the larger season opening events in the northeast region as many tracks will not be running on that particular night.  Representatives of both ESS along with the Patriot Sprint Tour have indicated that some 40, 360 Sprint Cars will be representing the two organizations as it is the season opener for both high profile sprint organizations.  In addition a multitude of top Modified teams have indicated that they will be at the season lid lifter at Outlaw Speedway. Besides track regulars like Matt Sheppard, Steve Paine, Tyler Siri, Alan Johnson, Justin Wright, Cory Costa, Derrick Podsiadlo, Brady Fultz and Eric Fisher, such standout competitors as Justin Haers, Donnie Lawson and Ron Cartwright Jr. have indicated they will be in attendance.