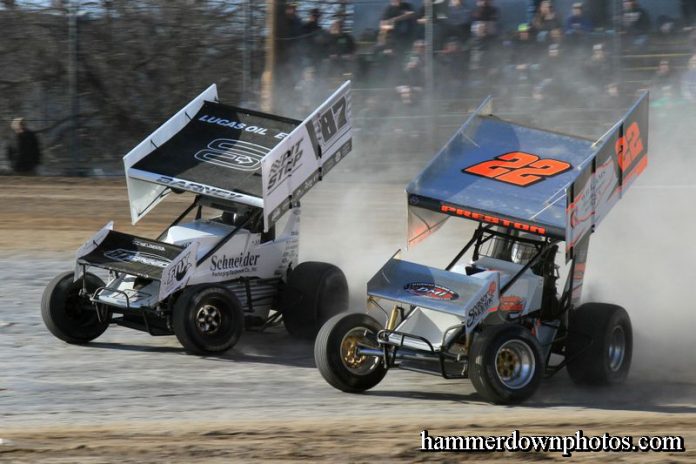 DUNDEE, NY – Jason Barney captured his first ever Lucas Oil Empire Super Sprint series title in 2017. On Saturday afternoon at the Outlaw Speedway, the Brewerton, N.Y., driver started his title defense off on the best note possible as he had a dominant run in the 25-lap A-Main event to score the $3,000 win. It was his 18th career series triumph and his first at the facility.

“I got to be honest I wasn’t expecting this,” commented Barney after his win. “I’ve never been that great here. We’ve never been horrible but haven’t been that great. We knew daytime conditions would make it interesting. We were lucky to start up front on the front row. I thought it was kind of our race to lose. They watered the top, I’m starting on the outside and I’m like, ‘we are just too tight for the little bit of brown up here.’ We freed the car up before we took off.”

As stated, Barney started on the outside of the front row alongside of Jonathan Preston after the scheduled starter had mechanical issues. Barney went to the top of the speedway on the first lap to take the race lead off of the second turn. He paced the field for the first lap before Preston tucked underneath him on the exit of turn four on the second circuit to take the spot away. At that point the duo battled at the front of the field with Preston able to keep Barney at bay.

As the race reached lap seven, Preston got his first taste of cars running at the back of the back. Preston initially tried to work the bottom before stepping out of line to go to the outside. That lane switch allowed Barney to dive to his inside at the exit of the second corner to regain the lead.

“I gave the lead away and thought, ‘there you go you big dummy you gave this win away,’ but we battled back,” mentioned Barney. “Me and my son (Rylin) had a conversation last night about how you can’t give up, can’t give in, you have to keep getting after it. I knew I wasn’t going to win following him around so I had to find something. I kept searching around and I felt the car getting a little grip. I was reaching for wing and anything I could find to get a little bit of grip. We got to him and I got lucky.”

Barney stayed on the inner part of the speedway as the race reached the halfway point with Preston staying in striking distance while dealing with fifth starting Matt Tanner.

During the final third of the event Barney was in heavy traffic forcing him to make a decision. Should he stay on the bottom or move to the outer groove to get by the slower cars. Barney went for it making a daring three-wide move off the fourth corner as Tanner made a move of his own to take the second position.

“I said, ‘I can’t wait anymore,’ I knew I had to go,” quipped Barney. “I could feel my tires starting to go. I would rather lose it trying to go for the win then wait for somebody to pass me.”

Tanner chased Barney over the final five laps but Barney was not going to be denied as he took the checkered in the NAPA Auto Parts Tour A-Main. Tanner, of Stephentown, N.Y., had to be happy with a runner-up finish on the night.

“I thought in the heat it might rubber-up on the bottom so we waited on it in the beginning there,” stated Tanner afterwards. “We caught it and got around Preston, but Jason (Barney) caught on to it too. Once he’s on the bottom it’s hard to get him off there. I knew it would take a miracle to get by him. It was definitely a good run. We’ve struggled here so to come and run second is a good start.”

Dylan Westrbook made a few moves of his own on the final circuit to move himself into the third position. He went for it and dove under Preston on the backstretch to take third in the runner order.

“I kept running my line, just kept on going, picking away,” said Westbrook. “I didn’t even know I passed him for third. I thought it was lapped car honestly. Everyone was so close together. They were all real good cars.”

Preston had to settle for fourth after starting on the pole while Billy VanInwegen made up some ground from his eighth starting position to finish in the fifth spot. 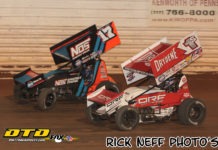