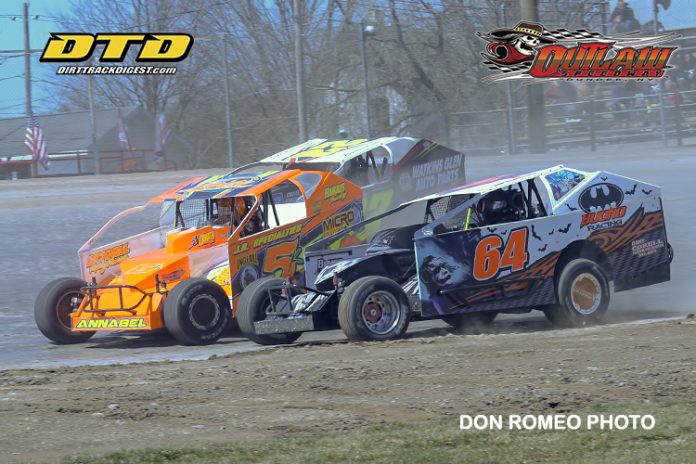 DUNDEE, NY – Outlaw Speedway track owner, Tyler Siri has announced that the Yates County Speed Plant will play host to an all new series for the 602 Crate Sportsman Division. Dubbed as the Outlaw Sportsman Series sponsored by American Racer Tire, each event in 2018 will pay between $1,500 and $2,000 to the winner with a nice purse structure from second on back. At the completion of the 7 race series the overall point champion will pick-up an additional $2,000.

In addition, at each event there will be tire give-a-ways compliments of American Racer Tire along with other products contingencies.

“We teamed up with American Racer Tire to put this deal together for the Crate Sportsman, stated track owner, Tyler Siri. The racers that have supported this track for the past several years have continually requested that we put some type of a series together for them to compete. By putting this 7 race series on the 2018 schedule it now gives the drivers that compete in this class a chance to race for some serious dollars several times a year, not just a couple isolated events. Even outsiders that don’t normally compete at Outlaw on a regular basis can now jump into the game and run the series and have a chance to not only win big the night of the event, but also at the end of the year with the nice point fund we have put together. With the money that the track is putting up along with all the American Racer Tire give-a-ways as well as other product contingencies this entire package adds up some pretty big dollars that the Crate Sportsman will be racing for.”

The first event is scheduled for Saturday, April 21 as part of the tracks 3rd Annual Spring Nationals.

The following series races will be held on June 20 in conjunction with the Brett Deyo promoted Short Track Super Series event for the Modifieds.

Race 3 is scheduled for July 10 and will be held as part of the Super Dirt Series race for the highly acclaimed touring Big Block Modified Series.

July 28 will see the running of the Annual Summer Nationals and Crate Sportsman Series race number 4 will be held as part of the two day show.

Tony Stewarts popular 410 All Star Sprint Series will run its 2nd event of the “18” season at Outlaw Speedway on Sept. 14 and it will also mark race number 5 for the Crate Sportsman Series presented by American Racer Tire.

The Fall Nationals scheduled for September 22 will see event 6 of the 7 race series and the Dutch Hoag Memorial weekend set for October 20 will find the Crate Sportsman Series wrap up the inaugural campaign and the overall champion will be determined.

In addition there will be two Hoosier Tire events that will pay a handsome $2,000 to the winner of each and those events will be held on September 21 as part of the Fall Nationals and October 19 on Dutch Hoag weekend.

For more information regarding the Outlaw Speedway including the full 2018 schedule of events, posted press releases, admission prices, track contacts and much more please log on at www.outlawspeedwayllc.com