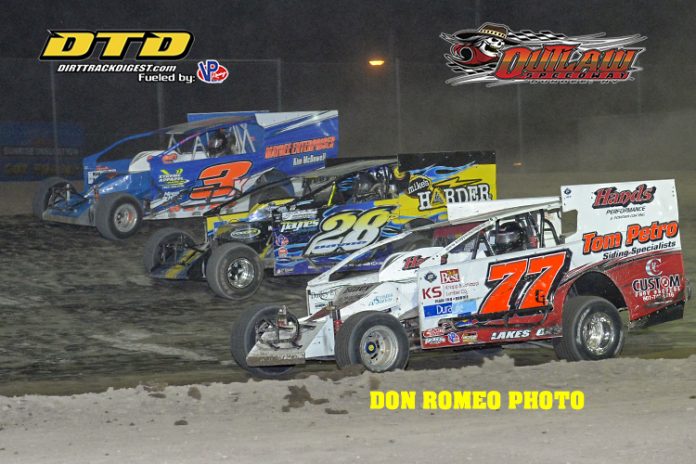 DUNDEE, NY – The first of three 2 night race events at the Outlaw Speedway will be the Annual Summer Nationals scheduled for Friday and Saturday, July 27 and 28, 2018.
Friday night’s segment will be a Regular Super 7 Show featuring the Friendly Chrysler, Dodge, Jeep, Ram Big Block/Small Block Modifieds. The Crate Sportsman will also see action as well as the Doug Gross Construction Crate Late Models (Friday only) along with the classy Street Stocks and the mighty 4 cylinders. The Decker Farmers Insurance sponsored Hobby Stocks and IMCA Modifieds will also be in competition and if that isn’t enough there will be a complete show of the A-Verdi Storage Containers Patriot and Lucas Oil ESS 360 Sprints. The top 3 in all of their respective features on Friday will automatically be locked into Saturday night’s feature events with the winners starting no worse than 5th on the grid. Whew, talk about an action packed event and that is only night one of the two night affair. And, oh yes a DJ will be onboard in the camping area at the completion of night 1.

Then on Saturday the Friendly CDJR Modifieds will race for $4,000 to win with the A-Verdi Storage Containers and the Lucas Oil ESS 360 Sprints returning for night two with their feature winner picking up a whomping $6,000.

Saturday night will also see round 4 of the 7 race Outlaw Speedway American Racer Tire Sportsman Series with the winner there taking down a cool $1,500. The Decker Farmers Insurance IMCA Modifieds will compete as part of the Empire Series with the winner collecting $1,200. Saturday night action will also include the 4 cylinders Outlaw style with the winner pocketing $750 and rounding out the card it will be the Decker Farmers Insurance Hobby Stocks with the victor collecting $500. A Chicken BBQ on Friday and Pig Roast on Saturday will also be available when the gates swing open each day.

Outlaw Speedway track owner/promoter, Tyler Siri is proud of the staff he has assembled and he knows that it will be a tall order in putting on a show of this magnitude.

“Generally speaking 2 day events are something reserved for later in the race season, but with the staff that I have here at the track we can pull this thing off right in the middle of the summer. It is going to require a lot of man hours over the two days including a tremendous amount of race surface preparation for both days as well as organization in the pits, camping and grandstand parking areas. There is no doubt with the number of classes we have racing the pits will be over flowing both nights. All the classes are racing for big bucks especially on Saturday night and over the two days of competition the total purse will be enormous! Camping will be wild for both nights as many fans and race teams are bringing their rigs and plan on staying the weekend. Fan attendance should be brisk for both nights and with the variety of classes that are completion there is something there for every taste. Open wheel Modifieds, 360 Sprints and IMCA Modifieds. Then there are all the full fendered classes including Late Models, Street Stocks, 4 Cylinders and Hobby Stocks. Whatever is your thirst, we can wet your lips!”


A-Verdi Storage Containers, a well-known, well respected company not only in the Central but also the Southern Tier Region of New York including the Finger Lakes will be the host sponsor for both nights of this year’s Summer Nationals event at the Outlaw Speedway.
It is anticipated that with a large entry into the pit area that pit gates will open earlier than usual on both days. All gate times for pit and grandstand entry as well as all ticket prices for both nights of the Summer Nationals can be found on the track web site.

Two other Friday/Saturday events are scheduled at Outlaw with the Fall Nationals scheduled for Friday and Saturday, September 21 and 22 featuring the first ever appearance of the World of Outlaw Late Model Series. The last two day event will be the final show of the 2018 season with the Annual Dutch Hoag Memorial Triple 7 Weekend on October 19 and 20, 2018. The 2017 Dutch Hoag Weekend found some 480 cars seeing action over the two days season finale.

Free rides around the facility on the Outlaw Speedway Monster Truck, “Outlaw Crusher” will begin both nights right after the main gates open and camping is absolutely free all weekend long.