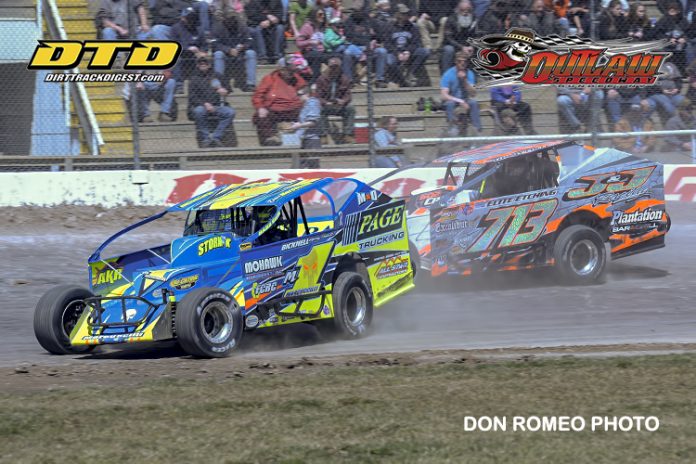 DUNDEE, NY – A big part of the two day Outlaw Speedway Summer Nationals will be the Saturday night running of round 4 of the Outlaw Speedway American Racer Tire Crate Sportsman Series. During the first three events, Dave Marcuccilli has been flawless in winning all three. He will head up a strong list of 602 Crate Sportsman drivers all looking for the winner’s check of $1,500 for picking up the win.

The Friendly Chrysler, Dodge, Jeep, Ram Big Block/Small Block Modifieds will also boast a huge contingent of competitors for both nights of the Summer Nationals all looking to hit pay day during the 2 night affair. The Saturday portion of the event will see the “Mod Squad” racing for some serious money including a minimum of $200 just to start and the winner of the feature go will pick-up a cool $4,000 for their efforts. With some Saturday night race venues being shut down on Saturday, July 28 it leaves the door wide open for many invaders to make the trip to the Yates County speed plant and take on the tracks regulars. Early indications point too many teams that would normally compete in other sanctioning bodies and race venues that have the night off will be heading to the Dundee, NY oval.

Like the Modifieds the 360 Sprints will also race for big bucks during the Saturday leg of the 2 day Summer Nationals. And like the Mod’s and most all the other classes of competition the Wonderful Winged Things will compete on both nights with Friday’s action being the prelim for the Saturday Night Main Event. This will be an A-Verdi Containers Patriot Sprint Tour/Lucas Oil Empire Super Sprints joint effort between the two traveling organizations which guarantees a huge car count and with no 360 Sprint racing currently any place in the region on Saturday it could very well mean that many of the top URC runners from Pa., New Jersey and Delaware could make the long haul to Outlaw Speedway to try and take home the $6,000 winners price. It is also speculated that some top Pa. Posse drivers that have access to a 360 Sprint will be in action as part of the 2 night affair. In addition each driver that starts the 360 Sprint Car “A” Main is guaranteed $400 just to take the opening green flag making the overall purse for the 360 Sprint Car event one of the largest if not the largest anywhere in the northeast in 2018.

“This has all the makings of a sell out for both nights, stated Outlaw Speedway Owner/Promoter,” Tyler Siri. “Before we released our 2018 schedule of events we looked hard to see what other tracks within a large radius were doing on the weekend of July 27/28. We wanted to put on a 2 day show in the middle of the year, but to pull it off we had to make sure we weren’t competing with many other tracks particularly on Saturday night. We have tried to gear this event to accommodate virtually every race car that competes anywhere in this region. Having the Crate Sportsman, Modifieds and 360 Sprints here and competing on both nights is going to pull in some serious car counts to say nothing about the Decker Farmers IMCA Modifieds which is an Empire State event on Saturday and pays $1,200 to the winner. The Street Stocks have had good numbers all season long and we are going to reward the Saturday winner of their feature with a check for $1,000.00. Now that should get some drivers attention! Likewise the Decker Farmers Insurance Hobby Stocks have supported the track with very good car counts all season and on Saturday the guys will race for $500 to win. Also, the 4 cylinder Outlaw Style will compete for a winner’s share of $750 on Saturday and with those kind of numbers it is a sure bet there will be a large contingent of invaders looking for the top prizes.”

The night 1, Friday, July 27 portion of the 2 night Summer Nationals will be a Regular Super 7 Show for all of the Outlaw Speedway regular classes of competition including the Doug Gross Construction Crate Late Models which will not be a part of the Saturday night program. The top three finishers in the Friday night feature action will all be locked into Saturday night’s features with the winner of each feature starting no worse than fifth on the Saturday night grid in their respective classes.


Last October during the running of the 2 day Dutch Hoag Memorial at Outlaw Speedway some 480 cars jammed the pit area over the two day affair which featured the same classes of competition which will race at the track during this year’s Summer Nationals Event. Siri concluded by saying, “I don’t know if we can get those types of car counts this time of year, but we have a lot to offer the racers and fans over the two nights of action and with the purses we are paying it will definitely get peoples attention!”

All ticket prices for pit and grandstand entry as well as all gate times will be posted on the tracks web site home page and on Facebook.

Camping is encouraged and is absolutely free all weekend long.

Free rides around the facility on the Outlaw Speedway Monster Truck, Outlaw Crusher will begin shortly after the main gates open both days.

Friday night there will be a Chicken BBQ when the gates swing open as well as a DJ in the camping area at the conclusion of the races. Saturday’s menu will feature a Pig Roast.
For more information regarding the speedway including contacts, directions to the facility, the current point standings as well as the schedule of events for the remainder of the 2018 season simply click on at www.outlawspeedwayllc.com.

You can also check us out on Facebook for continual updates throughout the 2 day Summer Nationals Event at Facebook@OutlawSpeedwayLLC. 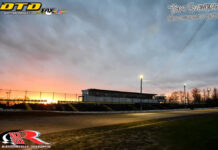 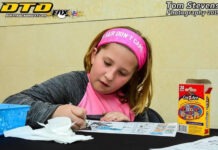