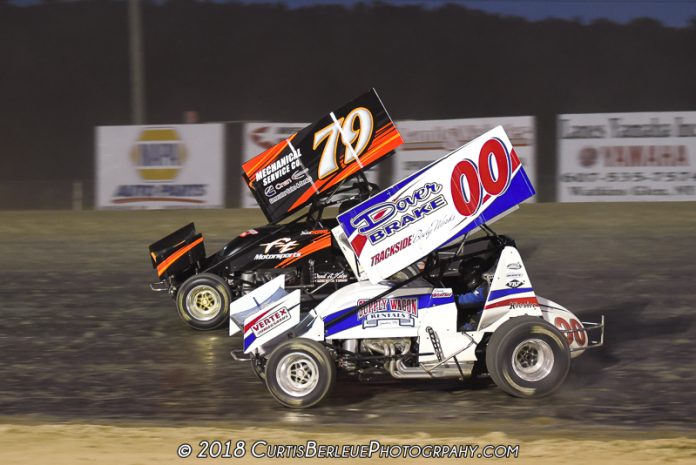 DUNDEE, NY – Since winning his first ever Patriot Sprint Tour Race nearly three years ago, Danny Varin has been among the elite drivers in 360 competition and on Saturday night at Outlaw Speedway, he proved why as the Fonda, NY driver got by Chuck Hebing on lap 26 and taking the first ever Outlaw Summer Nationals. Chuck Hebing had to settle for second, while Jordan Thomas finished third and completed the podium.

“Chuck [Hebing] has been phenomenal all year” said a surprised Varin in victory lane. “We definitely had our work cut out for us tonight. We definitely missed it Friday night but tonight we found the rubber, locked her down, he left the door open and we filled it.”

Due to winning the Twin 15’s Friday night, Matt Tanner and Chuck Hebing would start on the front row of the extremely competitive field in attendance. Identical to Friday night, Hebing would take command early as Matt Tanner would follow in second while fifth place starter Danny Varin would immediately get by Jordan Thomas and Coleman Gulick for third.

Jordan Thomas however was able to get back by Danny Varin for third and start gaining ground on the second place runner, Matt Tanner.

Lap traffic came into play on lap seven for Chuck Hebing but would not be a factor for any of the race leaders until lap 12 when Danny Varin was able to find an opening in turns three and four to get by both Tanner and Thomas for the runner up position.


Hebing would still lead but Varin continued to make ground on the 45 during the middle duration of the event.

By lap 21, Varin caught Hebing and waited for the opportunity to make his move for the next several laps. On lap 25, Hebing left just enough real estate open on the entrance of turn one where the two would go side by side for the race lead. Varin would get the better run on lap 27 and take the race lead.

Varin would go on to lead the final three laps and take home the $6,000 check and the first ever Outlaw Summer Nationals over Chuck Hebing, Jordan Thomas, Coleman Gulick, and Jeff Cook completing the top five.

“This win is huge because this track has been tough on me, that is why we were here Friday night” Varin continued in victory lane. “This is the highest paying race for us and this crew deserves it as much as anybody else. I probably should give this paycheck to my crew chief, Pete Northrup, he makes the changes I need and this car was fabulous.”

With the field being stout as it was, lap traffic was a factor for everyone including Chuck Hebing, who had to settle for second.

“I was really struggling with lap cars, couldn’t get by them and that allowed Danny to close the gap on me “ said Hebing. “The track was not the same as last night so I couldn’t roll through the middle so that made it real tough.”

Jordan Thomas was another car that was fast all weekend and came home with another podium to add to his 2018 campaign.

“Another good night and we will take it” said Thomas. “Had a great race with Gulick for third, just wish the track was a little more wide to see how we could have done.”

Thomas was also very happy with his car knowing there are a lot of big races coming up in the second half of the season.

“We are finding a good head of steam heading into the second half of the year. A lot of big paying races so we are just going to keep going and try to end the season on a high note.”